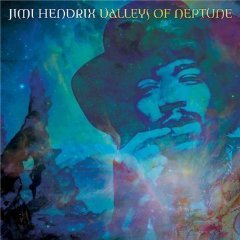 When the tracks that comprise Jimi Hendrix's Valleys of Neptune were recorded during 1968 and 1969, the guitarist/vocalist/songwriter was moving inexorably, albeit somewhat fitfully, into an earthier realm of music than his Experience image would allow. The gorgeous cover graphics of this archive title match the evocative music, as does the density of detail in the recording info (not to mention the accurate perspective Hendrix biographer John McDermott offers in his essay within the enclosed booklet).

The title song, appropriately enough, sets a tone for the album, with lyrics of cosmic paradigm shift akin to First Rays of the New Rising Sun (Experience Hendrix, 1997), its comic optimism buttressed by alternating fluid and staccato guitars. "Ships Passing Through the Night" foreshadows the R&B roots that became evident in Band of Gypsys (Capitol, 1970), while "Lullaby for the Summer" and "Crying Blue Rain" are largely instrumental pieces that conclude the album as if to reaffirm its latent intent: to depict Hendrix as a well-grounded exploratory musician, not just a psychedelic pop star.

The presence of "Fire," one of the earliest Experience tracks, might then seem out of place, especially as it appears right before the straight blues of "Red House." But what seems like a macho throwaway is, in this context, perfectly reminiscent of the rhythm and blues homage Hendrix offered during Electric Ladyland (Reprise, 1968) in the form of "Come On Pt. 1." And the subsequent cut reaffirms the late guitar icon's grasp of the blues, in its wry story telling as much as its piercing solos and rhythmic surety during its twelve-bar progression.

"Hear My Train A Comin'" is even more stirring as it sounds like a personal statement on Hendrix's part, but really no more so than his tribute to Elmore James "Bleeding Heart." Though the Seattle-born icon transcended genre, he was nothing if not a bluesman first and foremost, and Valleys of Neptune does justice to itself and the artist by positing him as the logical successor to Muddy Waters and Willie Dixon in the pantheon of the genre.

By dint of his remastering, original Hendrix engineer Eddie Kramer ensures even the most conventional rockers here, like "Stone Free" and "Lover Man," have a sonic depth matching the emotional content. And while "Mr. Bad Luck" (which eventually morphed into "House Burning Down") is a tale of woe, it's at least partly tongue-in-cheek. The instrumental cover of "Sunshine of Your Love" is an expression of pure joy, though, as the core trio of Hendrix, drummer Mitch Mitchell and bassist Noel Redding, augmented by percussion Rocki Dzidzornu, gleefully thrash their way through a jam in which the bedrock riff of Cream's is the foundation.

This new hour-long collection augurs well for the future archiving of the Jimi Hendrix legacy, because it reaffirms the true image of the man, not just as a guitarist of remarkable power and invention, but an adventurous musician never content to merely repeat himself.