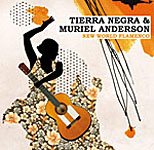 The spry flamenco guitars of Ebert and Henrichs are warm and sometimes seem to blow very hot, like desert winds that fill the empty quarters in the mind's ear. On New World Flamenco, the sixth album by the German duo Tierra Negra and an all-star cast that includes the harpist Muriel Anderson, bassist Victor Wooten, bassist Mark Egan, and drummer Danny Gottlieb, is a refreshing take on a world that is usually alight with flaming rhythms, vigorous dance, and an immutable dark and soulful force. Here the finger-style guitarists play a diffident music that retreats into a more wistful place, where vim and vigor may not be banned, but tend to take a back seat.

The music here recalls some early work by Strunz & Farah, by coincidence also a Germany-based duo that may actually have been the first to meld a certain style of classical guitar music into the fire of flamenco rhythms. But Ebert and Henrichs, or Tierra Negra, as they prefer to be called, are stylistically rather different. The duo rely more on the clipped rhythms of the Gypsy inflections of southern Spain and blend this with a rapid-fire linear vocal melodic style. This way they attain a unique singing style. The quieter nature of the music they play fills the ear with warmer hues—almost as if they were painting in watercolors that mute the strong earthy tonal colors of pure flamenco.

The voice of Muriel Anderson, who plays classical and harp guitar to embellish the work of the duo, is sharp and provides a fluttering canvas on which Ebert and Henrichs paint with sound. Anderson is a formidable talent whose finger-style playing stands apart in a cluttered world where posturing often drowns substance. Her resonant voice is heard throughout and although she is not credited with any solos, the brightness of the notes she sounds in harmony with the two other guitarists is almost palpable. "White Horses," "Entre Dos Riojas," and "View from Space" are sublime examples of Anderson's playing as she picks her way through clever and meandering melodies.

There is a welcome surprise in the inclusion of Victor Wooten on "Nosotros," a dark melodic tale, "Cloud Cover," a visually inspired feast, on which he solos inimitably, and "Fantasia de Fuego." The old rhythm friends from an early incarnation of the Pat Metheny Group—drummer Danny Gottlieb and Mark Egan on several tracks—lend a worldly sophistication to the record. But it is clearly the guitarists and their guest harpist who emerge as lead voices on this subdued yet memorable piece of musicianship.