By JAKOB BAEKGAARD
January 8, 2014
Sign in to view read count 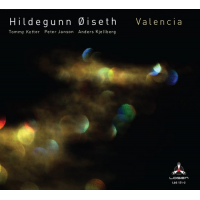 A name is sometimes able to conjure a whole world. In the case of Norwegian trumpeter Hildegunn Øiseth, the name of the Spanish city Valencia embodies a wealth of associations and feelings, which find their way into her music.

Her album Valencia was recorded in producer Odd Gjelsnes' Studio Berxeta and the contrast between the peaceful orange plantation where the studio is located and the pulsating passion of the city seeps into the music.

The opener "Sacred" and "Sårt" are both quiet meditations where Øiseth's spacious tone sings profoundly into the silence, whereas "Chasing My Own Tail" and "Roxy" are more restless in their nature. The former begins with a thunderous solo from bassist Peter Janson before he settles into a walking bass pattern that brings in the rest of the group with Øiseth, pianist Tommy Kotter and drummer Anders Kjellberg. On the latter, Kjellberg takes the spotlight and engages in a playful dialogue with Øiseth where her short outbursts and soaring lines are answered by his empathic response on the kit.

Valencia is a record that is able to embrace the pastoral sounds of the countryside and the restless intensity of the city. It is also an album that merges the Nordic lyricism of Øiseth and her Swedish group with the Spanish folklore previously explored by trumpeter Miles Davis on Sketches of Spain (Columbia, 1960). In the middle of it all, Øiseth draws her very own roadmap to a musical city that is entirely her own and it is wondrous place that is worth the visit.