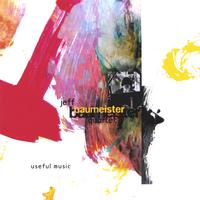 With the number of jazz albums released every month, it's becoming more and more challenging to keep up. Add the proliferation of small independent and artist-run labels and the task becomes nearly insurmountable. And that's a shame, because it means that talented artists are getting lost in the sheer mass of information out there.

Hopefully that's not a fate in store for Philadelphia-based pianist Jeff Baumeister, whose debut release signifies a new voice with a less-than-common set of roots. Baumeister's writing is conceptually complex—owing more to the advanced compositional approaches of classical composers including Vincent Persichetti and Paul Hindemith than it does conventional jazz tradition. But don't let thoughts of challenging musical concepts deter you. Baumeister and his quartet with saxophonist Greg Riley, bassist Peter Paulsen, and drummer Dan Capecchi make these acroamatic ideas engaging and wholly accessible. Completely captivating and with a certain aesthetic connection to classic ECM piano recordings, Useful Music has all the potential to be a classic in its own right.

It's easy to attribute Baumeister's abstract impressionism to the usual suspects, like Keith Jarrett and Bill Evans. But the truth is that his style is more rarefied. His approach is more closely aligned with artists like Steve Kuhn, Art Lande, and Bobo Stenson—who are fully capable of functioning within the jazz tradition when necessary, but when given free license lean more towards harmonic ambiguity that remains wholly lyrical and provocative. Nor is Baumeister's unassailable technique and advanced ideation on display for its own sake. The term "musical can sometimes seem trite; but Baumeister's strength at translating the sophisticated and the cerebral into the emotionally profound makes "musical a highly appropriate description.

And while Baumeister's music is multilayered, finely detailed, and filled with various thematic conceits, it's never jagged—further linkage to ECM albums by Kuhn, Lande, and another musical deep thinker, Richie Beirach. Capecchi's playing is light and, in the manner of Jon Christensen, he favors delicate cymbal work over strong pulses on the kit—although he can present a stronger front when required. Paulsen's approach seems informed by a Palle Danielsson-like European aesthetic, maintaining clear forward motion through the gentle changes of "The Realization of a Line, but also a melodic counterpoint. Riley, on tenor and soprano, pays the same kind of close attention to the purity of each note as does Jan Garbarek, but with a tone that's more about comforting warm than icy cool.

Still, while Useful Music has clear precedents, it's not simply a retro exercise. Baumeister's writing, while evoking its deceptively gentle veneer, is more structurally rich than its antecedents, making it a completely modern take on an established aesthetic. With a group concept that places musicality ahead of ego, Useful Music establishes a new player and writer—and a new group—who, if there's any justice, will attract the attention of those who know the reach of modern jazz extends well beyond the narrow confines of more traditional convention.

Track Listing: The Realization of a Line; Quiet and Restful but Moving; Wahbo; Color and Light; Balladynia; For DB.