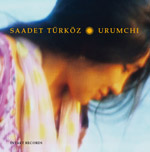 The Swiss Intakt imprint has long evinced a stake in stewarding ethnic improvisatory traditions. This new album by Kazakhstani vocalist Saadet Türköz presents one of the most striking distillations of an age-old idiom. Türköz's roots lie in the musical traditions of her forbearers, bred in the windswept steppe lands of what is now Eastern China. As a longtime resident of Zurich, European cultures have also flavored her perspective, but the music on Urumchi closely limns her ethnic heritage to create music that is both ancient sounding and bracingly immediate.

The disc's fourteen songs occupy under an hour's time. Türköz's voice, unprocessed and stunning in its emotional impact, soars and glides through verses in her native tongue. Strict meaning may be lost on Western ears (lyric translations are not included), but the feeling behind the sung stanzas stands out in emblematic relief. Accompaniment is spare but effective and ranges from bowed and plucked string instruments like the lute-related dombra to hand percussion, clay flute and Jew's harp. Cello even crops up on the brief "Elimay in sorrowful concert with the operatic strains of Türköz's voice. Dancing arpeggiated dombra runs bracket her lush resonating musings on "Silözen and "Akbulak, songs both elegant and exploratory in their conception, propelled by salubrious rhythmic couplets.

"Alis unfurls as an aural analogue to mist-shrouded peaks, arco strings and airborne flute braiding with Türköz's rich laryngeal trills to create a sound that's oddly akin an Irish chant. She sits out on the gorgeous "Küy, leaving Sayan Akmolda to a solo recital on the kilkobuz, a violin-like instrument whose virile arco strains rise and recede in opulent tonal swathes. Karsiga Ahmediyar gets a similar chance at solitary virtuosity on "Nurgisa, his tautly strung dombra launching galloping salvos that would likely make most classical guitarists green with envy.

Elsewhere, I was reminded remotely of the sounds of Djivan Gasparyan and Hamza El Din. Other listeners will no doubt attach their own personal referents, and it's this universality that speaks most to the palpable beauty of Türköz's art. Hers is a living expressive form that reverberates with and responds to individual experience, pointing out and celebrating the interconnectedness of all things. The Intakt label may be primarily known as a vehicle for Western European improvisers, but this disc points again to the impressive breadth of its interests. In the end, we remain the lavish beneficiaries of broad ears.