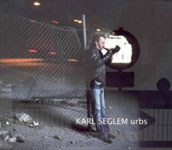 Karl Seglem's solo performance at the 2006 Punkt festival in Kristiansand, Norway prompted the observation that he is, indeed, the Hendrix of the Goat Horn. That anyone could take such a pure and organic instrument, feed it through an array of effects and come out the other side with a mix of contemporary jazz, Norwegian folk music and more, made it one of the most ear-bending performances at a festival that continues to demonstrate just how far away from its roots jazz has traveled.

Of course there are those who'd simply say that what Seglem—an equally accomplished tenor saxophonist- -does is not jazz. And it may well not be—certainly not by traditionalist definition. But the real question is: does it matter? Seglem's previous release, New North (Ozella, 2004), bore a closer resemblance to the expansionist jazz-centricities of fellow countrymen including Jan Garbarek and Nils Petter Molvær, the latter a guest on that disc. As intriguing an album as New North was, with its core group and wealth of guest appearances, urbs benefits from a consistent line-up and, like many of his fellow Norwegians, a world view that transcends the boundaries of his Scandinavian home.

The title track combines drummer Helge Norbakken's booty shaking Afrobeat, guitarist Olav Torget's metal- edged distortion, co-producer Reidar Skar's live electronics and Seglem's goat horn—so heavily processed, at times, that it becomes something else entirely. The Afro-centricity continues on "Morenelys," with Seglem switching to tenor sax, but when Håkon Høgemo joins in with his Hardanger fiddle—which combines a four-string bowed violin with additional sympathetic resonating strings—its simple melody pulls the music towards a roots sound, drawing an unmistakable link between the traditional folk music of the Norwegians, Celts and Persians.

Garbarek's attention to tone and the purity of every note informs Seglem, though Seglem possesses a warmer tenor tone. While solo opportunities exist, Seglem's writing is often so predisposed to song form that it would be easy to imagine this music being reworked for a vocalist, territory he explored, in fact, on New North.

Think the textures and lyricism of Garbarek's Visible World (ECM, 1996) combined with the modernistic beats, samples and electronics of Nils Petter Molvær's Khmer (ECM, 1997). Add the unique sound of Seglem's often-times processed goat horns and group instrumentation capable of evoking feelings ancient and futuristic—often at the same time—and you've found the unique nexus point where Seglem and his group live on urbs.