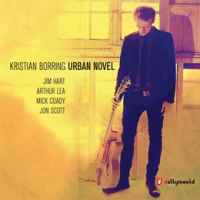 Danish guitarist Kristian Borring has been based in London since 2006, establishing himself as a leader and sideman on the UK scene. Urban Novel is his second album, his first for the small indie label Jellymould Jazz. Recorded in London in December 2012, Urban Novel is filled with Borring's original compositions and performed by the guitarist in the company of some of the best sidemen in Britain. It's an album that readily enhances Borring's reputation.

Borring's debut release, Nausicaa (Ultra Sound Records, 2011), showed him to be a strongly melodic player. On Urban Novel he continues to demonstrate that ability, which is enhanced by his warm, open, tone—a welcoming sound that draws and holds the attention. Borring is joined here by pianist Arthur Lea and drummer Jon Scott, both stalwarts of Nausicaa, plus bassist Mick Coady.

Where Urban Novel differs instrumentally from the debut album is in Borring's choice of guest musician, with vibraphonist Jim Hart replacing alto saxophonist Will Vinson. It's a crucial change, from the contrasting sound of the alto to the much more complementary sound of the vibes. Hart shares Borring's warmth and fluidity of expression, creating a rewarding partnership.

The tunes on Urban Novel range from the bright, sparky, "Number Junky" to the silky bossa-ish groove of "Arcade Coffee Shop" and the melancholy "(Kasper) In Darkness" and "Urban Novel" which both feature some gorgeous unison playing from Borring and Hart. The vibes/guitar combo is also strikingly rich on "Hipster," the album's most immediately accessible tune blessed with a catchy melody and insistent rhythm.