The Doors: The App and Beyond

BY DOUG COLLETTE
July 20, 2014
Sign in to view read count
Given the late Jim Morrison's fascination with media, plus the film school experience he shared with Ray Manzarek, it's more than a little fitting The Doors have unveiled their own computer app. Few rock bands have their own app, apart from those centered on a specific release, but then, few have the near half-century history to draw upon, as do The Doors.

Subtitled "An Immersive Journey," the app certainly is that. With a dense multi-layered menu of music, images and prose, all features are, as stated in the user guide, "embedded within the app making ideal for your enjoyment away from the connected world." Yet, as co-designed by Jac Holzman, the president of Elektra Records who had the foresight to sign The Doors to his heretofore folk-oriented label, this digital resource has sufficient built-in connections—to social media as well as the band's own website—to prevent those using it from turning too insular for their own good.

And comprehensive as it is, so much so it might work as a template for other artists to emulate, there's no denying how The Doors app will pique the curiosity of anyone who uses it more than a few minutes and thus move them to investigate the work of a band that's been such a source of inspiration to generations since their debut in 1967. 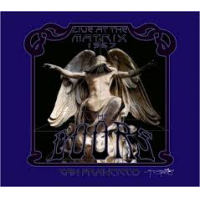 The execrable Absolutely Live (Elektra 1970), The Doors official concert album released at the peak of their popularity, might be construed as the compensatory impetus behind subsequent live recordings such as this. Except that the historical quality of the performances themselves prompted the high demand along with the volume of bootlegging of the tapes. Reminiscences from the bandmembers aren't really so vivid as the techno-speak shared by engineer Bruce Botnick in the liner notes, his enthusiasm for the project rooted in a love for the music and the band that, at this early juncture in their career, were taking an explorative approach to their work eventually shut down by the very celebrity to which it gave rise. As documented here, the improvisational nature of their performances recall the initial fascination with the Doors that, over the course of just a year to eighteen months, became camouflaged by the inflated persona of their frontman. With each CD of the pair wholly different material (aside from markedly different lyrics on "When the Music's Over" for instance), it's quite clear The Doors were not Jim Morrison and a backing band: for instance, hear John Densmore's dramatic drum work on "The End," where there's yet another instance of lyrics far removed from the recorded version to come. 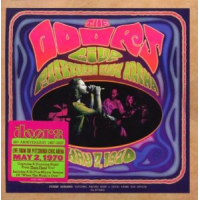 Preceding the splendid box set Live at the Felt Forum (Rhino, 2009), this Bright Midnight title offers a microcosm of the self-renewing focus Jim Morrison and the rest of the band applied to their performances of the period. Not known for a sense of humor, the wry self-deprecating likes of "Tonight You're in for a Special Treat" works as effectively as those tracks that surround it such as "The Soft Parade Vamp" and "Close to You" (sung in appropriately stentorian tone by keyboardist Ray Manzarek); this healthily detached approach allows both the band and its audience to co-exist, if not exactly luxuriate, in the spontaneity of the moment arising from a single guitar, keyboards and drums. The sparse sound of The Doors never generated a more haunting atmosphere than in the public forum when the rabble rousing to and from the stage was limited. 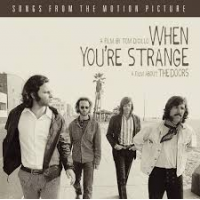 The Doors
When You're Strange: Songs from the Motion Picture
Rhino
2010

Whether you're a Doors fan or simply an aficionado of contemporary rock, this title is as worth owning as its video counterpart, even though the combination of spoken word content (recited by Johnny Depp) and music threatens to terminally romanticize the group for most of its cinematic duration. Still, the film ultimately creates a palpable suspense by the interweaving of segments featuring the band itself on video and (even just) audio, to chronicle of their formation, ascent to celebrity and their subsequent demise within their struggle to come to terms with their high profile. On compact disc however, the alternating sequences of poetry, interviews with the group and other spoken word segments propel the impact of often-rare live and studio recordings, so that When You're Strange accurately (and credibly) depicts how The Doors transcended their era.

Tracks: CD 1: Break on Through (To the Other Side); Soul Kitchen; Money; The Crystal Ship; Twentieth Century Fox; I'm a King Bee; Alabama Song (Whisky Bar); Summer's Almost Gone; Light My Fire; Get Out of My Life, Woman; Back Door Man; Who Do You Love; The End. CD 2: Unhappy Girl; Moonlight Drive; Woman Is a Devil/Rock Me; People Are Strange; Close to You; My Eyes Have Seen You; Crawling King Snake; I Can't See Your Face in My Mind; Summertime; When the Music's Over; Gloria.

Tracks: Back Door Man; Love Hides; Five to One; Roadhouse Blues; Mystery Train; Away in India; Crossroads Blues; Universal Mind; Someday Soon; When the Music's Over; Break On Through (To The Other Side); Push Push; The Soft Parade Vamp; Tonight You're In For A Special Treat; Close to You; Light My Fire.

When You're Strange: Songs from the Film

Tracks: (Poem): Cinema; (Poem): The Spirit of Music; Moonlight Drive; Poem: The Doors of Perception; Break on Through (To the Other Side); (Poem): A Visitation of Energy; Light My Fire; (Interview): To really be a superstar; Five to One; (Poem): Wasting the Dawn; When the Music's Over; (Interview): The Doors-The four of us are musicians; I'd like them to listen; Rock & roll and jazz; Our music is symbolic; Hello, I Love You; Interview: Dead Serious; People Are Strange; (Poem): Inside the Dream; Soul Kitchen; (Poem): We Have Been Metamorphosized; (Poem): Touch Scares; Touch Me; (Poem): Naked We Come" (Poem): O Great Creator of Being; The End; (Poem): The Girl of the Ghetto; L.A. Woman; (Poem): Crossroads; Roadhouse Blues; (Poem): Ensenada; Riders on the Storm; (Poem): As I Look Back; The Crystal Ship; (Poem): Goodbye America.