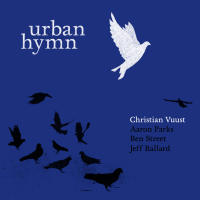 Multi-reedist/composer Christian Vuust has been a mainstay of the Danish jazz scene for close to thirty years. A professor at the Royal Academy of Music in his hometown of Aarhus, Vuust has crafted a significant discography as leader, working with some of Denmark's best jazz musicians. Urban Hyms marks a departure for Vuust, being his first CD recorded outside Denmark. Recorded in a single day in New York, Jeff Ballard, Ben Street and Aaron Parks's sophisticated yet subtle support frames Vuust's original compositions, which draw deeply from European and American wells alike.

Danish psalms have heavily influenced Vuust—he's made five recordings in the Danish Psalm Duo with pianist Hans Esbjerg—and his warm tone and unhurried delivery owe as much to the simple melodic narrative of church song as they do the New York jazz tradition. In the main, fidelity to the tunes and their overriding ambiance outweigh overt shows of virtuosity and given the brief time together in the studio the quartet sounds remarkably tight. Bass, drums and piano sound as one on the first beat of "Helgenæs," the trio entering the spirit of the song without preamble. Vuust and Parks deliver gently sparkling solos, a prelude to a delightful saxophone/piano unison motif accompanied by Ballard's bewitching percussive accents.

Street, whose presence is felt as much as heard, instills a subtly bobbing rhythm on the laid back "Lærke," a feature for Parks, whose pristine solo is framed by Vuust's spare, melodic lines. Ballard switches to brushes on the softly hymnal title track, the slow contours of which emphasize the warmth in the saxophonist's phrasing. The tender ballad "Wedding Song" shares similar roots and features a teasingly brief intervention from Street. Ballard's processional fills conjure ceremony, contrasting with the emotive quality of Vuust and Park's playing.

Several numbers are inspired outright by Vuust's New York sojourn: the aptly named "Rubato NYC" is a ruminative piece notable for its spaciousness; greater rhythmic pulse imbues "Biking the Big Apple," with piano and bass vamps and propulsive drums doing the pedaling as Vuust's smoothly evolving lines cut a more impressionistic flow. Pianist and saxophonist work in close unison on the mellifluous "Tompkins Square Park"-a storied corner of Manhattan and one of the homes to the Charlie Parker Jazz Festival.

The intensity and emotional energy of the evocative "Fjer"—featuring another nuanced solo from Parks—may owe as much to New York's vibes as any of Vuust's other compositions. "Summer Bygone" is a traditional Inuit song from Greenland; Vuust collaborated with Swedish guitarist Tobias Sjogren on Northern Voices: The Thule Spirit (Virgin Records, 1997)—elaborate arrangements of Eskimo drum songs—and his balladic approach on this song from the Thule region is heartfelt and compelling.