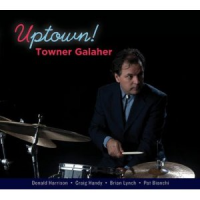 Uptown!, like drummer Towner Galaher's two previous releases, relies on multiple horns to flesh out the leader's melodies and some choice covers, but it's still a departure from his earlier work. Piano, bass and drums with some added percussion was served as the rhythmic nucleus at the center of Panorama (Self Produced, 2007) and Courageous Hearts (Self Produced, 2009), but Uptown! is all about an organ-drum relationship at the heart of the music.

Galaher enlisted rising star organist Pat Bianchi as his rhythm mate on this hip, horn-heavy program and they exhibit a strong connection from the get-go. They prove to be a lockstep duo, demonstrating near telepathic rapport as they move through a laundry list of grooves with style and swagger. Waltzing affairs ("Simone" and "East 104th St. Waltz"), sizzling Latin concoctions ("Cafe Con Samba"), thought-provoking ballads ("House Of Jade"), straight-eighth soirees ("Phantom City"), shuffling sounds ("Shuffleocity") and swing all surface at one time or another.

While Galaher takes a tom solo on the album opener, and Bianchi is given space to shine as a soloist at various places throughout the program, the primary objective of this rhythm section is to hold down the fort and lay the foundation while the horns have their say. Alto saxophonist Donald Harrison joins force with trumpeter Brian Lynch and tenor saxophonist Craig Handy, who are both holdovers from Courageous Hearts, to form a front line with plenty of firepower. All three men bring an infectious energy into the music. High spirits are in the air at all times, as they feed off of the rhythm section and each other.

Galaher, who has been based in New York for more than two decades, is the least known entity on his own release, but this album doesn't come off as one of those times where the leader hires all-stars to cash in on big name credibility. This five-piece aggregate seems to have a genuine connection that comes through in its playing; this makes Uptown! a delight to hear from start to finish.