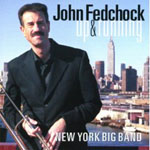 If there is reader out there old enough to have heard a Swing Era big band live, then you might know what the phrase "full roar" implies. Even on record, the sheer sound of Ellington, Basie, Lunceford, Calloway, Goodman, Shaw or Herman bands can be hard to beat in the goose bump department. Add the John Fedchock New York Big Band to that list.

Big bands died primarily because of economics, but also there is an inverse correlation between player freedom and the size of an ensemble, and many of the better soloists chafed at the lack of solo time. Arrangers ruled in the Big Band Era, and the eight bar solo was common. However, for most of the Swing Era, jazz, big band jazz was the popular music and was everywhere—on the radio, in hotels and in the clubs. Everyone was working, and many musicians who became quite famous got their start in a big band.

Fedchock's band has been operating since 1989 with many of the original personnel, and Up & Running is its fourth release on Reservoir. Performing much the same function as the Swing Era bands, quite a number of musicians who were unknowns twenty-five years ago are now established names.

If you have the slightest predilection for extremely tight, highly swinging, very happy music with cutting edge charts and soaring solos, then Up & Running will be returned to your player many times.

The ten tracks are split between originals by trombonist and arranger Fedchock, most inspired by musicians like Elvin Jones, J. J. Johnson and Woody Herman, and arrangements of tunes written by George Gershwin, Sonny Rollins and John Coltrane.

"Embraceable You" is of particular interest since it is a radical reworking and reharmonization of this well known favorite. Fedchock never loses touch with the essence of the tune, but the arrangement is a fascinating example of what can be done.

Otherwise, Up & Running is the kind of record to put on, pull up a chair, have a beer and listen to some terrific arranging and killer solos by such players as tenor saxophonist Rich Perry, baritone saxophonist Gary Smulyan, trumpeter Scott Wendholt, plus Fedchock himself.

Mainstream and modern at the same time, Up & Running is a fine example of jazz that feeds both body and mind.