John Scofield Band: Up All Night

By Farrell Lowe
October 6, 2003
Sign in to view read count 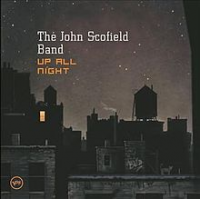 The Freaky Deaky is back! This is the most inspired playing I have heard from John Scofield in many years. On Up All Night, Scofield has found the elusive spot (as a player) between knowing what he's doing and what he doesn't know. The band caught at the time of this recording exists at that junction—a place beautifully balanced between solid compositional form and sheer improvisational grace. Scofield hasn't been this hungry in a long, long time!

If you liked Scofield's last album, Uberjam, be prepared for a quantum leap in both conception and playing on Up All Night. And if you didn't like Uberjam, then you might be surprised here by the extent of Scofield's talent. This music harkens back to the leader's lean and mean days with Miles Davis, although it doesn't have the same sound. What it does share with Miles' work from that era is rawness, sheer guitar power from an expert player, and genre-busting grooves that have one foot in the jazz camp and the other in deep-fried Philly Soul.

The band is comprised of a solid electric bass and drums rhythm section, then complemented with massive samples and rhythm guitar work from Avi Bortnick, and topped off with Scofield using creative guitar samples, live backwards guitar, and an extended tonal palette. Six tunes employ a badass horn section that really fills the sound out. The horn arrangements were written by Scofield, who brings an almost "Gamble and Huff" sensibility to the music.

The new technology and "jam band" sensibility works wonders for Scofield's playing style. While his playing has been rather contrived in the past, it is anything but on this recording.

Scofield's style has always owed a lot to his ability to create fluid chromatic melodic lines. That was what made him and Mike Stern a formidable duo in Miles' band. Stern's raw power and direct blues-rock feel pushed Scofield to a new, more supple guitar style, and I hear a similar rawness and thrust behind the band here. These young guys push Scofield into much- needed new directions, and he rises to the challenge. He throws his fluid legato style smack dab into the middle of some warped-out funked-out backwards shit, still coming out on top. It's a joy to hear someone who can play the guitar so well actually play the music so well. Check his guitar work on "Like The Moon." His playing on the disco-tinged and aptly-named "Freakin' Disco" is absolutely on fire...damn!

This modern gem from a modern guitar icon is well worth your listening consideration.

Philiopiety; Watch Out For Po-Po; Creeper; Whatcha See Is Whatcha Get; I'm Listening; Thikhathali; Four On The Floor; Like The Moon; Freakin' Disco; Born In Troubled Times; Every Night Is Ladies Night