By Donald Elfman
September 14, 2005
Sign in to view read count 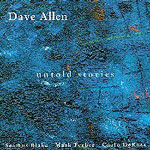 The Fresh Sound label and its owner, Jordi Pujol, continue to mine untapped wealth in New York with the New Talent series, discovering scores of fine musicians playing and writing under the radar, extending the jazz tradition by exploring new colors in which to improvise. The label's latest release is guitarist Dave Allen's debut.

Allen—who has a regular trio gig at New York's Push club, where he plays every Monday—has come to be known for both his sense of melodic lyricism and sense of adventure in the realms of harmony and rhythm. He's played with a number of younger as well as established musicians, including Dennis Irwin, Donny McCaslin, and Chris Cheek.

Untold Stories reflects Allen's concentration on developing a personal sound on his instrument, as well as a growing compositional richness that allows for both individual expression and dense group interplay. All of the tunes here are by the leader, though they superbly show off his sidemen. Check out saxophonist Seamus Blake's sinewy lines on the album's opener, "Momentum, and the rhythm section's throbbing pulse on "In Some Human City, with a line reminiscent of Stravinsky's Firebird. It reveals that the leader is smart enough to utilize his own sound to create pictures to tell a story.

Compositional highlights include "Searching, a beautiful ballad showcasing bassist Carlo DeRosa's arco skills and powerful use of space; the delicate "Out of the Trap, in which tenor and guitar state the simple quiet line before being buoyed rhythmically in their solo work by DeRosa and drummer Mark Ferber.

Untold Stories is notable for its consistency of intention and for the introduction of yet another voice finding its way in the inventive world of creative improvisation.

Momentum; In Some Human City; Searching; Paradigm Shift; Spring Snow; Out Of The Trap; Samba 7; Not Even The Rain; Uneasy.