By Ian Patterson
February 4, 2021
Sign in to view read count 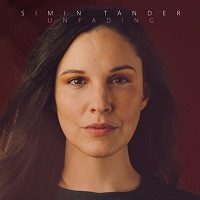 Simin Tander's evolution has been fascinating to behold since her impressive debut Wagma (Neuklang Records, 2011), which featured pianist Jeroen van Vliet, bassist Cord Heineking and Etienne Nillesen on drums. The German/Afghan singer's whispered gravitas and keening lyricism on jazz-filtered chanson, Latin American balladry and her poetic originals was captivating enough, but her non-syllabic vocal improvisations signalled an original artist, unbound by convention. That same line-up delivered the even stronger Where Water Travels Home (Jazzhaus Records, 2014), with Tander expanding her range with Afghan poems sung in her father's native Pashto.

For What Was Said (ECM, 2016) Tander joined Tord Gustavsen and Jarle Vespestad, finding her muse in the poetry of 13th-century Persian Sufi mystic Jalal al-Din Rumi, via the prism of Norwegian church music. What might have sounded risqué on paper scored international success, the trio touring the world extensively to unanimous public and critical acclaim.

Where the comfortable next step would have been to hit repeat, or return to the bosom of her first quartet, Tander chose a different path. With Unfading, Tander again displays the essential elements of her craft: poetry-inspired balladry in various languages, and her trademark vocal improvisation, with electric bassist Björn Meyer, drummer Samuel Rohrer and Tunisian viola d'amore player Jasser Haj Youssef sparking fresh chemistry.

Tander's own compositions—essentially poems set to music—lean towards the melancholy, though her voice occasionally takes powerful flight, as on the striking gothic tale "Walk Each Other Home," and on the unaccompanied, wordless vignette "Breath." Drone-like bass effects and a sombre beat convey a funereal air on the title track, though there is great allure in the chemistry between Tander's soothing tenor and Jasser Haj's yearning legato. Musical box delicacy pervades "The Sea Is Near," a lullaby of sorts, while more sombre lyricism colors the wordless "And the Water Stretches Far Away."

By contrast, the Pashto-sung "Yar Kho Laro," from a 1960 Afghan film, is given a rock treatment, with Meyer's driving bass and Tander's soaring vocal combining powerfully to provide an album highlight. Elsewhere, Tander sings in Spanish on a haunting rendition of Manuel de Fallas' "Nana," duets with Rohrer on "Deserted"—a reworking of a Gabriela Mistral poem—and gives a sultry, recitative interpretation of a Sylvia Plath poem on "Feather/I am Vertical." A stripped down, intimate arrangement of Bob Dylan's "The Times They Are A Changing" closes the album on an understated though emotive note.

Like a morning raga, Unfading invites silent meditation. For those who surrender to Tander's singular spells the rewards are bountiful.

Hovering Winds; Nargees; Walk Each other Home; Feather/I Am Vertical; Sta Lorey; Walli De Haal Ne Wayee; Unfading; Yar Koh Laro; Deserted; Nana; The Sea Is Near; Breath; Nargees Afterglow; And the Water Stretches Far Away; The Times They Are A Changing.