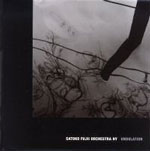 Satoko Fujii's New York big band carries a big stick, blowing away any and all obstacles as the musicians interpret this program of her soul-stirring compositions. Everyone solos on this creative journey into the avant-garde, and Fujii's cohesive orchestra provides a stable foundation. Undulation, the band's sixth album, is tight. These players have been together long enough that one band member reads the next fluently and with an intuitive disposition.

Fujii's compositions lay the groundwork for creative impressions that the bandmembers interpret individually and collectively. Metal features tenor saxophonist Ellery Eskelin and trumpeter Dave Ballou in a driving rainstorm of powerful forces. "Water features trumpeters Natsuki Tamura and Steven Bernstein conversing within jazz's traditional framework, in a surreal landscape of fluid wave motion. On "Wood, trombonists Curtis Hasselbring and Joey Sellers interact in a highly syncopated rhythmic encounter which brings the two soloists together for a stroll that Mother Nature can only stand back and watch.

"The Moon features alto saxophonist Oscar Noriega and bassist Stomu Takeishi in a slow and peaceful episode that emulates the farthest reaches of outer space. On "The Sun, trumpeter Herb Robertson and trombonist Joe Fiedler pursue a bright affair of majestic proportions. Its strength pushes the program through a powerful emotional rip tide.

Undulation begins with collective noise from the entire band. Like a lizard or a bird puffing out its neck to impress an observer, the orchestra hammers this piece at the start. Fujii's piano then takes over for a call-and-response give and take that pits her against the band. It's a virtual tug of war that finds piano on one end of the rope with lyric acquiescence, and the ensemble at the other end with a blowhard spirit intending to do harm. In Nature, the gentle lizard or bird would figure out a way to hide from this giant menace. In Fujii's big band reality, however, the quiet piano voice wins out in the end.

Fujii's Orchestra New York combines the power and emotion of Mingus with the tight soloing of a contemporary all-star organization. Her compositions lead them through valiant adventures that leave vivid memories for the listener and lend a lingering, upbeat glow for the future of her organization's never-ending saga.