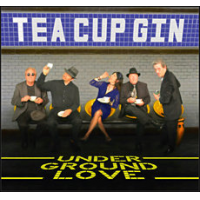 Since its inception in Paris by inimitable guitarist Django Reinhardt in the 1930's, gypsy swing, or "jazz manouche," has been performed within defined parameters, though there has always been ample room for improvisation and invention. Tea Cup Gin, on its debut release Underground Love, has found a niche playing their hybrid form of gypsy swing or hot jazz by integrating sultry jazz vocals into a smoking rhythm section, while maintaining the integrity this music requires.

Expanding upon the two guitar and bass framework, they have added a percussionist, and vocalist Christy Benson, takes on the arduous role of covering the violin or clarinet parts, predominantly featured in many classic recordings of the genre. From the opening swinger "Lost With You," Benson displays grasp of the vernacular, knowing how and when to stretch the lyrics for the desired vocal effect of an instrumental nuance. In a gifted exhibition of versatility "Underground Love," and "I Wonder," might well be described as melancholy blues, complete with stinging guitar lines, and "Memory," slides into a nocturnal tango scenario. "Moment," and "Rebecca," are also encased in Latin tempos, allowing the perfect time signature for the guitar accompaniments. Showcasing the guitar duo of John Klonowski, and Mike Reid, who both play lead, the melodic and acoustical interplay within the group is of the highest caliber, and they bring a defined authority of the music at hand.

The band wrote eight of the ten tunes on the record, of the two covers, "Caravan," is given a stimulating syncopated structure, and the perennial "Lush Life," which wraps up the set, again permits vocalist Benson to reveal her obvious affinity for the jazz idiom. Hailing from North Carolina, where they maintain a rigorous performing schedule, Tea Cup Gin has its roots firmly grounded in the gypsy swing tradition, and are basing their reputation and repertoire on that. Not only can they execute the songs successfully, they come across as a band that is having a blast doing it, and it shows in the music.