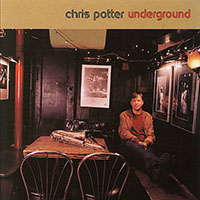 Billed as Chris Potter's funk album, Underground takes a conceptual leap of faith into uncharted waters. Classifying this as either a funk or a fusion record is shortsighted. Though a strong rhythmic undercurrent flows through the majority of the record, it offers much more.

One of the most promising tenor saxophonists of his generation, Potter is joined by an all-star lineup. Ubiquitous keyboardist Craig Taborn handles double duty as Fender Rhodes soloist and the group's bass foundation. Underexposed but distinctive fusion guitarist Wayne Krantz makes a rare sideman appearance. His singular approach reveals a vast range of expression—from delicate, unadorned lyricism to raucous, metallic furor. Drummer Nate Smith demonstrates a remarkably dynamic sensibility. Smith may be the least well-known member of the quartet, but he contributes an infectious enthusiasm that elevates the entire group.

Potter's writing is often knotty and complex but never stifling, allowing his bandmates ample flexibility within the structures. Engaging in simultaneous four-way call and response, their tight rapport is focused, but not traditionally straight-ahead. While these arrangements are more obtuse than those of a typical groove session, they still deliver the goods.

Alternating between driving funk and ambient introspection, Underground is sequenced to maintain interest over the duration. When Smith digs deep into the backbeat, bringing the rhythm to a boil, the quartet goes for broke. Potter's intervallic linearity culminates in passionate screams, while Krantz's muscular guitar fires torrents of serpentine melody. Taborn spins swirling Fender Rhodes lines that invoke past masters while advancing headlong into the future. Taborn's bass notes are the quartet's secret weapon. The softly insinuated harmonic anchor of the Fender Rhodes avoids the pneumatic conventions of slapped electric bass and other such funk tropes. This ethereal vibe permeates the album, distancing it from similar efforts.

Not all is roiling intensity, however. Potter demonstrates lyrical fluency on a gorgeously spacey interpretation of "Lotus Flower," providing respite from angular, contrapuntal workouts. Updating standard repertoire, Potter provides a studied but passionate reading of Radiohead's "Morning Bell," as well as closing the album with a brief but gorgeous take of the Beatles' "Yesterday."

Breathing fresh life into a genre fraught with clichés, Potter's quartet proves that primal groove and intricate interplay needn't be mutually exclusive. Underground is yet another document in the early stages of what should prove to be a long and fruitful career.