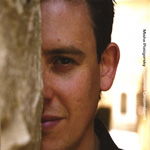 Mother Russia has given birth to some of the greatest musical and literary talent of the 20th and 21st centuries. Add to this mammoth list the name of pianist, composer and producer Misha Piatigorsky, a native of Moscow who now makes his home in New York City. Piatigorsky's resume includes a Bachelors Degree from Rutgers University under the tutelage of pianist Kenny Barron and a subsequent Masters Degree from the Manhattan School of Music. Piatigorsky's picture came into full view when he won the BMI Thelonious Monk Composers Competition, rounding out his considerable curriculum vitae (all of this in addition to his producing chores).

Piatigorsky, who has also recorded Aya (2007), Trio del Sol (2005) and Piatigorsky Ensemble (2001), follows up these releases with Uncommon Circumstances, a trio outing on which he exercises his considerable skills on both the acoustic and Fender Rhodes pianos. His approach ranges from the neoclassically influenced ("Where is the Sun") to the funk-punchy ("Montevideo"). "Land of Confusion" is, in spite of its title a seething organism guided by the smooth flowing bass of Hans Glawischnig and the assertive yet polite drumming of Ari Hoenig. Piatigorsky's writing is smart and never condescending to the listener.

The title cut finds Piatigorsky again on Fender Rhodes, lyrically chording his way through a thoughtful introduction that takes on its own velocity, ultimately sustained by the entrance of the rhythm section. "Uncommon Circumstances" is immediately assimilated in much the same way most Baroque music is—it is easy to understand and listen to. This is a tribute to Piatigorsky and his band, since making music this accessible requires much talent and experience.

The pianist gives the lone standard, "I Fall in Love to Easily," a plaintive treatment; his carefully constructed introduction raises the piece to the status of Mendelssohn's Songs Without Words. Uncommon Circumstances is an uncommonly refined recording by a talent we must hope provides more of such music.