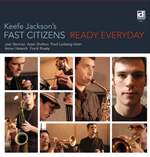 Here's another instalment of vibrant, stimulating listening out of Chicago, and as with the work of Ken Vandermark's various groups, this programme blurs the line between composition and improvisation to the point of extinction. The resulting music is the product of a highly cohesive group.

Cellist Fred Lonberg-Holm seems to have adopted the recording studio as a kind of second home lately, and what's most remarkable about the level of exposure this has afforded him is how consistent his work is. There's no chordal instrument on this set, and Lonberg-Holm, bassist Anton Hatwich and drummer Frank Rosaly lay down the kind of rhythmic carpet that an unsuspecting soloist could figuratively trip up on. "Course," however, reveals just how the two effective halves of this group come together.

The cornet hasn't exactly been overexposed on record in this kind of setting, and Josh Berman's work on "Blackout" is an effective summary of how telling it can be, especially given the influence of Don Cherry on his work. The skewed unison lines of the horns also hint strongly at how this band has come together and how much promise it has for the future, especially when the leader's tenor playing reveals how much effort he's evidently put in to getting his own sound.

"Ready Everyday" itself also shows what a distinctive composer he is, even when he appears to be doing little more than providing an outline for improvisation. Getting so much out of such a seemingly negligible line is no mean feat in itself. On "Signs" the playing by both Lonberg-Holm and altoist Aram Shelton is remarkable, not least because their respective solos comprise a study in contrast. The fact that the group can cover so much ground over the course of less than ten minutes highlights the multidimensional quality of their work.

This tangible depth of commitment to the music seems to have been nowhere near as common as it should be in recent years. As such, this band is holding a standard aloft. Let's hope it acts as a rallying point.