BY BRUCE LINDSAY
January 22, 2013
Sign in to view read count 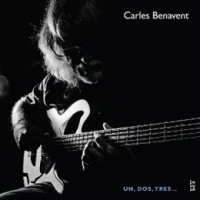 In a 40-year career that has encompassed jazz, rock, fusion and the establishment of the electric bass guitar in flamenco music, Barcelona musician Carles Benavent has constantly evolved his approach to his chosen instrument. His most notable collaborations, with guitarist Paco de Lucia and pianist Chick Corea, are part of a musical story which also includes a series of albums as leader. Un, Dos, Tres... is the seventh of this impressive series and finds Benavent in top form as a player and composer.

Although Benavent's bass is at the musical core of Un, Dos, Tres..., his use of additional instrumentation gives the music a wide and ever-changing tonal range. Drummer Roger Blàvia and keyboardist Roger Mas are core members of Benavent's trio, while the contributions of guest musicians range from Ravid Goldschmidt's gently melodic hang on "Tirititran Catalan" to the trio of trumpet, tenor saxophone and tuba on the driving, jazz-fusion, "Cara Bobo." Benavent also doubles on acoustic or electric guitar on most of the tracks.

"Bailas?" is an effortlessly funky trio number, with Mas' irresistible electric piano groove at its center plus Benavent's touch of electric guitar. Full of life and energy despite being pared down to a duo, Benavant's "Don," is a bouncy and vibrant tribute to the late percussionist Don Alias, featuring the swift, tight bassist and conguero Blàvia, while Catalan composer Federico Mompou's "Scenes D'Enfants (Jeunes Filles au Jardin)" showcases Benavent's imaginative combination of genres. Mompou wrote the tune around 1915-18 as a solo piano piece; Mas introduces the beautiful melody on acoustic piano, and Benavent follows on bass, but the piece is underpinned by a rich flamenco-influence rhythm from Blàvia's brushed drums and Tino Di Geraldo's tablas, creating a delightful sonic image of young children at play.

"A Solas" is a solo effort recorded in an American hotel room while Benavent was testing a new laptop. While this description might suggest a throwaway track, it has much greater substance: atmospheric and occasionally spooky, Benavent adds some vocal interjections on top of what sounds like multiple layers of bass guitar, the whole coming across like a crazed flamenco/swamp rock crossover, and it's huge fun.

Un, Dos, Tres... offers many examples of Benavent's mastery of his instrument: his technical command is exceptional, his expressive ability outstanding. Crucially, there's much more than instrumental mastery to enjoy here—this is an album from a musician with a strong emotional connection to the music, a connection that is present in every note he plays.