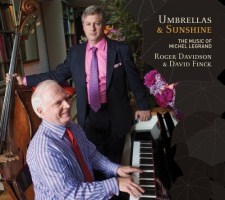 Many people never take the time to truly say how they feel about important people in their lives until it's too late. The same holds true in the jazz community. Posthumous tributes pour out of magazines, newspapers and websites, and are delivered via recordings when important figures of the music pass on, but something resonates more deeply when an artist is still around to receive these plaudits. The great Johnny Mandel recently received such an honor when the DIVA Jazz Orchestra, under his baton, recorded and released a live set built around his compositions, and now another composer of note—pianist Michel Legrand—receives his due, through these delightful duo readings from pianist Roger Davidson and bassist David Finck.

While Legrand's lush language and sweeping sense of romanticism and drama come through on many performances here, that doesn't account for all of the material. Perky piano and jovial walking bass lines meet in mutual satisfaction ("Watch What Happens"), while Davidson is at his seductive best on a solo run through of the lesser-known "Look," and a bouncing, happy-go-lucky sense comes over this swinging pair on "Les Parapluies De Cherbourg." When Davidson reprises this piece as a solo work at album's end, his penchant for Latin jazz is heard loud and clear.

Those who prefer the Legrand songs that connect like love letters, causing the body to swoon in recognition of their contents and requiring a tissue in hand to dab the gently falling tears, will also find plenty to love. Finck's spine-tingling arco on "The Summer Knows" is a good match for the dramatic arc that Davidson paints, and "The Easy Way/What Are You Doing The Rest Of Your Life?" is a haunting work that lingers long after it ends. The pair reaches a peak in emotional resonance on one of Legrand's better known works, "How Do You Keep The Music Playing?," "which serves as a finale of sorts, before Davidson delivers a coda with his reworked "Les Parapluies De Cherbourg."

Davidson and Finck cover Legrand in grand fashion and with any luck the maestro himself will have an opportunity to hear such things.