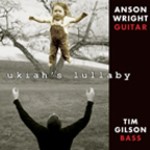 The two men, guitarist, Anson Wright and bassist, Tim Gilson enjoy a special relationship. Most duos are close-knit units. In a few very special instances, the two musicians thrive on something uncannily telepathetic. For instance, they will complete each other's phrases without missing a beat or a phrase. Whether they enter behind or on the beat they know where the "idea" is going. Even their shadows follow one another's and intersect as though it was predestined. The duos of Glen Moore and Nancy King and Moore and David Friesen are a lot like this. Now guitarist Anson Wright and bassist Tim Gilson take their relationship to the next level on Ukiah's Lullaby.

The two musicians appear born to be together. There is almost no sunlight between them. However, both musicians are acutely aware of the instruments they play —the sound perspective from each, whether bowed, arco con brio, or plucked—legato or staccato, in the case of the bass and strummed or plucked in the case of the guitar. These possibilities make for a rich palette of sound.

Wright is an obvious disciple of the Jim Hall school of playing and that means single note runs and glittering arpeggios that dart and canter languidly across many registers. Solos that may begin inside out and constantly rap at the hull of the melody as new harmonies are invented. Nevertheless, no matter what the song calls for, Wright always tunes his ears to tone and color. Notes are often delayed, hang behind a beat, and are bent towards altering moods with subtly augmented tones. A fine example is the somber melodics and a mix of fifths and sevenths in "The Healer, or with dramatic consequences in "Resurrection." Elsewhere the emphasis in on sound and not so much on notes.

Several of the songs are crafted to be tonal meditations on varying states of mind. The song "Hope" is one such track that dwells on and ascribes sounds to the intensity of the feeling as the protagonist begins to cling to it or lose it altogether. "Resurrection" is a more profound song and is full of soft meditative rumbling. Its simple harmolodic explorations return it to realm of the spiritual and the mysterious.

Wright has developed a system of playing rooted in his urbane sensibility. He is soft, and plays rarely above a whisper. His exchanges with Gilson are thoughtful to the extent of becoming intellectual as on songs like "Resurrection," "Martin's Day," and "Gifts." On "Sometimes There are No Words," however, a song written by this very accomplished bassist, the protagonists are reversed. Gilson plays lead and crafts a profoundly thoughtful musical solo. He is sublimely articulate with a wonderful tone and manner.

Clearly the guitarist and bassist have formed a symbiotic relationship and the music here is proof of that. This music also hints at a more secret snd soulful connection, one that comes from a deep love for sound.