She’s been called everything from a “Cult figure” and an “uncompromising artist,” (Earshot Jazz) to “the greatest living jazz singer,” (Herb Ellis). As one of the few improvisers in vocal jazz to master the vocabulary, Nancy King has “indefatigable scat chops and a remarkably elastic range.” (The Oregonian)

Nancy came to the San Francisco jazz scene of the early 1960’s from Springfield, Oregon. It was at the legendary Jazz Workshop that she met Sonny King, her future mate, and joined his band. They headlined Monday nights at the Workshop for two years. Others she worked with in San Francisco included Vince Guaraldi, John Handy, Sonny Donaldson, and Flip Nunez. Another major influence was meeting and studying with Jon Hendricks.

In ‘66 and ‘67, Nancy did the Playboy Club circuit and was a production singer in Las Vegas, then joined C. Smalls and Company, led by Charlie Smalls, who later wrote the music for “The Wiz”.

In the early 1970’s she took a break from touring, settling in Eugene, Oregon to raise her three sons. On weekends she sang in the lounge of the Benson Hotel in Portland with future jazz luminaries Ralph Towner, David Friesen and Tom Grant.

The first recording to feature Nancy King was “First Date”, an outing with saxophonist Steve Wolfe on the Inner City label. Joining them in the studio were Ray Brown, Jack Sheldon, Frank Strazzeri and Nick Ceroli. The record’s release was celebrated at Michael’s Pub in New York City, where the great pianist Bill Evans stopped in to play a few tunes.

Nancy’s collaborations with Glen Moore (bassist for the internationally known ensemble “Oregon”) include performances at NYC’s Town Hall, the Montreal Jazz Festival and several European festivals. Together as “King and Moore” they have recorded three albums on the Justice label beginning with “Impending Bloom” in 1991. That cd and the following release, “Potato Radio”, earned five star reviews from Downbeat Magazine. “Cliff Dance” was released in 1994.

Nancy and Steve ChristoffersonMeanwhile, Nancy had been performing locally and along the West Coast with pianist/composer Steve Christofferson since 1978. In 1993 they released a duo album “Perennial”, featuring guest appearances by Leroy Vinnegar, David Frishberg and Ralph Towner. During the mid-90’s Nancy and Steve were on the faculties of the Stanford University Jazz Workshop, Bud Shank’s Centrum Jazz Workshop and Jazz Camp West, and performed at festivals in France, the U.S., Israel and Canada. In 1997 Mons Records released “Straight Into Your Heart”, recorded in Holland and featuring Nancy and Steve with the fifty-one piece Metropole Orchestra.

In 1998 Nancy was reunited with Ray Brown on his cd “Some Of My Best Friends Are Singers” (Telarc) which also featured vocalists Dee Dee Bridgewater, Kevin Mahogany, Marlena Shaw, Etta Jones and Diana Krall. The recording peaked at #1 on the Gavin Jazz Chart in January 1999.

Nancy toured Italy with guitarist John Stowell in February ’99, and toured Europe with the Ray Brown Trio in March. In the summer of ’99 Nancy and Steve Christofferson played at the Telluride Festival in Colorado with Tom Wakeling, and then flew to Bulgaria to headline at the Bansko International Jazz Festival. She was also heavily featured on a recording by Portland-based pianist Randy Porter entitled "Modern Reflections"

In early 2000 Stellar Records released “Dream Lands”, a compilation of duet recordings with Steve Christofferson commissioned by the Canadian Broadcast Corporation. Performances in 2000 included a concert with Karrin Allyson in Chicago, a gig with Steve and the Oregon Symphony featuring the orchestral arrangements from “Straight Into Your Heart”, and a collaboration with Elvis Costello and Deborah Harry in London’s Royal Albert Hall (“The Fire at Keaton’s Bar & Grill” - music by Roy Nathanson). The same year Nancy and Steve completed their 7th recording session for the CBC.

In 2001 Nancy was inducted into the Oregon Jazz Society’s Hall of Fame.

Selections from “Dream Lands” were featured on the Jazz Riffs Sampler played on NPR stations throughout the US. Nancy and Steve performed at jazz festivals across western Canada (Calgary, Edmonton, Saskatoon, Medicine Hat), were on the faculty of Bud Shank’s Centrum Jazz Workshop, and Nancy toured England and Holland with “The Fire at Keaton’s Bar & Grill”.

“Dream Lands vol. 2” was released in 2002, and Nancy played 4 sold-out concerts in Israel with Steve. They went back in March 2003 for a tour including a concert in Tel Aviv with a 45-piece orchestra.

In 2004 Nancy performed in New York with pianist Fred Hersch, and with Steve at the Earshot Jazz Festival in Seattle.

This year Nancy and Steve have traveled to Australia (for concerts in Brisbane and the Perth International Arts Festival) and appeared in Seattle, New York and Southern California (at Steamers) for nightclub gigs and workshops. "King and Moore" reunited for a small "bass and face" tour. Nancy continued teaching at Centrum--this summer with Kurt Elling.

With a performance alongside Karrin Allyson in September at Lincoln Center followed by a guest spot in an upcoming Karrin CD (also featuring Jon Hendricks) and the upcoming duo release (recorded at the Jazz Standard) with brilliant pianist Fred Hersch on the MAXJAZZ label... Nancy King continues to inspire and entertain as only she can. Show less

Nancy King Leads Improv and Duo Workshop in the Languedoc, August 28 to... 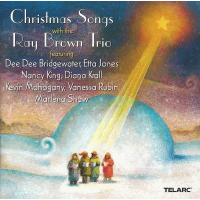 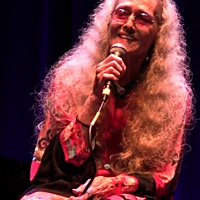 All About Jazz musician pages are maintained by musicians, publicists and trusted members like you. Interested? Tell us why you would like to improve the Nancy King musician page.