U2: Innocence + Experience: Live in Paris

BY NENAD GEORGIEVSKI
July 17, 2016
Sign in to view read count 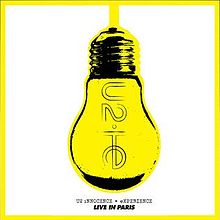 Music's soothing powers in times of tragedy and upheaval have proven to give comfort, inspire dialogue and open people's minds. Giving succor to victims of tragedies and terrorist attacks is in a way music's noble employment. Music always provides time and space for reflection. In the aftermath of the terror attacks in Paris in November 2015, when terrorist squads attacked various locations in the city, it was music's healing powers that were summoned to give comfort to the grieving city/country. In the killing spree that evening throughout the city there were at least 130 dead and plenty more were injured. Most of the victims came from the shooting and the hostage situation at the Eagles of Death Metal concert at the Bataclan concert hall. At the time, the rock band U2 was rehearsing for a run of two shows at AccorHotels Arena where one of the concerts was supposed to be recorded and broadcasted by HBO. Consequently, in fear of other attacks, all of the concerts and activities were canceled. In the aftermath, the world joined in solidarity and many of those concerts were rescheduled.

So it was no small matter when U2's canceled concerts were rescheduled for December 6th and the 7th. The video that was shot during the second concert captured moments where the music not only gave comfort but was also an act of defiance. It was a solidarity act as well, but much more this concert was uniting fans who have gathered to defy what the terror squads were aiming to do—to disrupt the power of music and life as they specifically targeted a concert venue. France has particularly been vulnerable to a series of attacks, starting from Charlie Hebdo to the aforementioned terror attacks in Paris and at the moment of writing of this review another terror attack in Nice during the celebration of the fall of Bastille.

The Paris concerts were close to the end of U2's lengthy and memorable Innocence and Experience Tour, but with the rescheduling, those became the final two concerts. The video starts with singer Bono and guitarist Edge as they ruminate about their excitement and anticipation when they go on stage every night and especially their eagerness to perform again in Paris just three weeks after the attacks. From those opening moments, one can notice the band's special gift where they transform a big event into an intimate and personal show as Bono climbs to the stage as from the speakers echo Patti Smith's "People Have the Power." The show opens with a blistering set of three songs "The Miracle (Of Joey Ramone)," "Vertigo" and "I Will Follow" which have a galvanizing effect on the audience to powerful effect.

Relying heavily on various on and off-stage cameras, the director provides plenty of close-ups and distant views of the band members in action. The band plays in a very tight formation as they are centered around drummer Larry Mullen Jr., and the play closely to each other. On the stage, Bono is, as he always is, the most electrifying of live performers as he leads people through an amazing experience that U2's shows are. The I&E shows are unlike the grand visual extravaganzas from the past or more precisely, Zoo TV or the 360 Tour with the Big Claw. While this tour was not of a magnitude as these, still, the I&E concerts were engaging shows both thematically and visually with its dazzling visuals and interaction with audiences. As a result.Live in Paris is a feast for the eyes and ears.

Despite initial media onslaught when Songs of Innocence was released on iTunes, over time the album proved to be an excellent one and a grower. Much of the set here on this concert features plenty of songs from this record standing shoulder to shoulder with popular classics and perennial must-plays. Songs such as "Iris (Hold Me Close)," "Cedarwood Road," "Song for Someone" with its subject themes read almost like diary entries and provide different dynamics to the whole thing. The next chapter leads to a set of protest songs like the classic "Sunday Bloody Sunday" where throughout the songs the screens projected the photographs of the victims at Bataclan are projected. This leads to "Raised by Wolves," a song inspired by a car bomb in Dublin when they were teenagers and "Until the End of the World" closes this violent chapter. Edge's guitar work is something to be marveled at all throughout while Bono sings his heart out.

"The Fly" receives a full make over and is now a completely a different song. It's an arrangement by singer Gavin Friday and it can be heard originally on the Q magazine's AHK-toong BAY-bi Covered tribute to U2 CD. The song is sung in the backstage as the rest are taking a break before the next chapter of the show commences. Meanwhile, the screens project colorful visuals with messages from the Zoo TV days. The remaining half of the set is peppered with songs accompanied by dazzling visuals such as "Even Better than the Real Thing," "Mysterious Ways," "Elevation" "Every Breaking Wave," "With or Without You" and many other gems. In a show laden with highlights, one song truly fires up the arena—"Bullet the Blue Sky" simply blasts in this arrangement bolstered by striking visuals on the screens. The effects are so visceral that it really is the closest thing to being there.

The emphasis of the cameras at this stage of the show is more on the band as they play their popular classics and these scenes portray the emotional content the songs project rather then on the visuals. The end is reserved for the band Eagles of Death Metal which concert was stormed by the terrorist at Bataclan and which lives were scarred by the event. Both bands sing Patti Smith's powerful anthem "People Have the Power" and EDM finish the night with their boogie rock tune "I Love You Too."

Each tour the band has undertaken so far has been crowned with a concert film that testifies where the band stood at that point in time. For the last 20 years, U2 has continually been raising the bar for rock concerts, sitting almost unchallenged at the top. In the end, the band rocked the arena with their youthful and volcanic energy, but with a voice full of experience and soul. Live in Paris is an acf of defiance and celebration of life despite grim circumstances.