By NENAD GEORGIEVSKI
April 20, 2013
Sign in to view read count 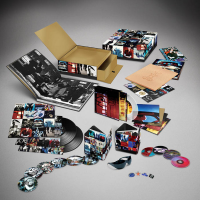 Every once in a while, a record will appear that will change the way to which music is listened, which will expand concept of music and its essence and boundless potential. A record of such importance has the ability to disrupt and shake the space-time continuum of musical history, serving as a signpost to everything that will follow afterward. One such record was U2's Achtung Baby (Island, 1991), which was hailed upon its release as a rock 'n' roll blueprint for the 21st century—a work of art that set the music world on a fast-track to the future. It reflected a major change in the Irish rock group's style as it took a risky move, but the end result was a record comprised of equal parts innovation and consistency.

Recorded during the waning days of the old world аt the start of the '90s (beginning with the fall of the Berlin Wall), perhaps it was its despairing tone and theme of alienation that captured the Zeitgeist of the time. These were strange times, full of rapid collapses and brutal changes, accompanied by a flood of television coverage. As the world was changing, the music world was following suit. Suddenly, the alternative underground music began to find its way to large mainstream audience, and this was one of the records that started and marked the whole process. The mega commercial success of Rattle and Hum, (Island, 1988), in fact, brought U2 to a creative dire straits so that by the end of the decade its band members were searching for a new musical and spiritual direction.

This search led the band to Berlin, where it tried to run as far as it could from itself. The basic idea was to create a forward-looking and forward-thinking record, To this end, the quartet employed producers Brian Eno, and Daniel Lanois, along with engineer Flood to help it out. The first significant feature of the album was its being recorded at Hansa, the studios where Eno worked with British singer David Bowie on the first two of his famous Berlin Trilogy: Low and "Heroes" (both RCA, 1977). This, in turn, reflected the U2's distancing itself from the American roots of rock and roll that dominated its previous output, instead embracing more European influences, adopting sounds that were surfacing and being generated in the dawn of the new age.

However, U2's journey towards the realization of this idea literally tore the band apart. These were dark and gloomy times, filled with uncertainty. The problem U2 had with the new material was that it couldn't reach consensus on its true value. Guitarist Edge, in particular, was drifting into experimental music, noise rock, electronics and alternative guitar sounds, while the others were not keen on following him. The band found itself on unfamiliar terrain, hitting dire straits with the results. Not everyone agreed that the new material was heading in its desired direction. It proved to be a challenge to realize a completely new artistic endeavor as an identifiable core essence and product. As U2 steered through the many failures and clashes that threatened to destroy the band, its saving moment was a single song that seemingly landed in its lap. The song was literally a lover's quarrel that perfectly reflected and summed up the situation in which U2 found itself. The song was "One," an artistic triumph which unwittingly proved, together with the whole of Achtung Baby, that transcendent music can truly stem from hostility and tension. What finally resulted from those situations proved to be one of the album's biggest strengths: substantial contributions from each member of the band.

The end result of this make-or-break album was exactly as U2 anticipated. On this record and its follow-up, Zooropa, (Island, 1993), U2 began to set a new precedent for studio improvisation in the rock sphere. It featured the most dazzling use of electronic and studio sounds since the era of The Beatles or Bowie. What emerged was a weird juxtaposition of frantic sounds—dense instrumental textures influenced by techno, hip-hop, industrial and alternative music with a quality of unrest, raggedness and recklessness—and introspective lyrics.

As a record, it is a piece of music that redefined the band's sound. It works as a great album as a whole, but also as a brilliant set of individual songs. The 12 tracks found here are brimming with lyrical ambition that never neglect musical exploration and refuse to repeat the successful formulas of the past. Instead, U2 strove for innovation and surprise, regardless of the risk. It was a record that was intentionally inaccessible, and was not meant to be liked at all costs. The music and its sound were so full of electricity and life; not only was the sound dark, disturbing and gloomy, but the lyrics were also strikingly different. All the religious zeal, earnestness and politics so evident in U2's previous opuses gave way to a mixture of all that is doubtful, cynical and ecstatic. The themes deal with a wider range of topics that were more personal and introspective than what came before. U2 examined love, sexuality, spirituality, faith and unfaithfulness, desperate loneliness, and betrayal to a degree that was invigorating and fresh for the group. Simply put, in its own words, this was the sound of four guys chopping down the Joshua Tree (Island, 1987).

"The Fly" was chosen as the first single, simply because it sounded nothing like U2; it was a barrage of distorted and vicious guitars, drums and vocals. Another shocker was the opening riff of "Zoo Station," which sounds like a distorted tsunami wave rushing out of the speaker. It all sounds rather heavy and distorted, including Bono's voice, which barely sounds human. Particularly, the Edge's guitar part that comes in at the chorus sounds like daylight seeping through a crack in the ceiling. This is the sound of a band trying its damnedest at reinventing itself.

Yet, the record does not descend into hopelessness and contemplation. Throughout, there is a sense of purpose and an uplifting sentiment, though at first it may seem disquieting and disturbing. "So Cruel," "One" and "Who's Gonna Ride Your Wild Horses" are bittersweet songs that showcase some of Bono's most emotionally stark and naked songwriting. "Until the End of the World" was a song U2 wrote for Wim Wenders' 1991 film of the same name—a great example of Bono's lyrical bent to ponder relationships through distinctly religious imagery, as the theme of betrayal is portrayed through Judas' kiss. As such, these songs make heartache seem appealing, cause the heart to tremble with beauty, yet also feel like a descent into love's darker chambers.

"Tryin' to Throw Your Arms Around the World" is a ray of sunshine in the midst of an emotional storm. It is a humorous and intentionally naive song (actually a drinking song). The synthesizer melody distantly echoes Serge Gainsbourg's classic "Je T'aime...Moi Non Plus." "Mysterious Ways" and "Even Better Than The Real Thing" are seductive, groovy, shuffling and funky tunes full of sexual imagery.

"Acrobat" may be one of the best songs that U2 has ever written. It's a venomous song with its themes of hypocrisy, where Edge's guitar, with its eerie Velvet Underground-esque scratchiness, sounds like an air raid, all along his sonic brushstrokes adding a sense of rush and tension. The album ends with the emotionally bruised "Love is Blindness," which tells of the consequences of being blinded by love, and the where it can lead. Never has a song's tone so complemented its title. It is a stirring statement of unsatisfied desire, and words simply can't do service to how perfectly this song captures the agony of loss.

There has never been a band in music history that has polarized people with its capability to inspire and enrage as much as U2. The number of people that love the band's music equals the number of people that dislike it. Popularity does not mean being adored by millions, but those millions will have an opinion on an artist and his/her/their work. Ambition has always been a blessing and a curse for this band. Nevertheless, Achtung Baby received almost unanimously positive reviews upon its release. Amongst critics, the album was lauded as a musical masterpiece, a landmark of its time that would have far-reaching influence and importance.

Achtung Baby is what records like the The Rolling Stones' Exile on Main Street (Rolling Stones, 1972), Led Zeppelin's Presence (Swan Song, 1976) and Bruce Springsteen's Darkness on the Edge of Town (Columbia, 1978), to name but a few, meant to the artists who made them when they were facing uncertain and difficult times. In a way, this is the right follow up to Joshua Tree . If that record was a natural evolution for U2, Achtung Baby was a necessary one. Its sound echoed a band rebelling against its own stereotypes and embracing uncertainty with full ardor. There comes a time when artists have to do decide whether they will be appreciated for their consistency or for their ability to change. Achtung Baby is inaccessible yet inviting and seductive, when its musical riches are unveiled. It is an album of power and dignity, and the one that truly showcases U2's brilliance, both musically and lyrically.