By JOHN EYLES
September 14, 2012
Sign in to view read count
From the very start of his musical career, guitarist Fred Frith has been equally at home as an improviser, a songwriter or a combination of the two. His first group, the legendary Henry Cow, always featured a balance between songs that were used as a springboard for improvisation and free improvisations. In contrast, his debut solo album Guitar Solos (Caroline, 1974) featured eight tracks of unaccompanied improvised guitar, including prepared guitar; Frith's innovative, experimental approach to his instrument was highly influential, and the album was hailed as a landmark. Its sequels Guitar Solos 2 (Caroline, 1976) and Guitar Solos 3 (Rift, 1979) earned no marks for the originality of their titles but included solo contributions from other guitarists, notably Derek Bailey and Hans Reichel on the former, and Keith Rowe on the latter. In the same year Guitar Solos was issued, Frith indulged his other side by playing guitar and violin on Robert Wyatt's single version of the Monkees' "I'm a Believer." Two of Frith's latest releases provide evidence that those two contrasting sides are still very present. 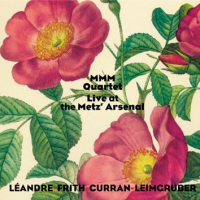 MMM was recorded live, in November 2009, at the Metz' Arsenal in Lorraine, France, during a mini-tour organised by bassist Jöelle Léandre. She, Frith and pianist / electronicist Alvin Curran had worked together extensively at Mills College in Oakland, California where each of them was teaching music. The bassist comments, "The quartet could be 'Ma Ma Mia' or 'MillsMusicMafia'!'" In addition to the Mills trio, the foursome includes saxophonist Urs Leimgruber, a long-time associate of Léandre's on albums such as No Try No Fail (hatOLOGY, 1996) and Out of Sound (Leo, 2001). The music consists of one continuous improvisation lasting some 45 minutes followed by a six-minute encore. The lengthy "Part One" leaves no doubt that it is freely improvised, as all four players contribute their trademark sounds to a constantly shifting soundscape. Throughout it, small examples of each player bubble up to the surface only to then be subsumed again and replaced by the next one. While the players are responding to each other's playing, there is little time to savour each response before the next one arrives... and so on. Consequently, this is music that can be listened to repeatedly, with each repetition revealing some new and intriguing detail. After about thirty minutes—and for no apparent reason, but maybe prompted by vocalising by Léandre—the piece shifts its pace, becoming less busy, more tranquil and reflective, while retaining its capacity to engage the listener. The encore, "Part Two," is different again, with all four players' interweaving, but with Léandre's bass repeatedly attracting attention. Throughout the album, Frith's guitar is in evidence but it never dominates; this is the sound of the guitarist as an equal member of a fine improvising quartet. 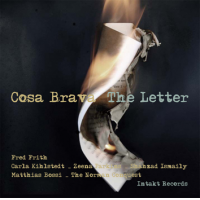 In complete contrast, Cosa Brava is an experimental rock and improvisation group formed in 2008 by Frith. In it, he contributes guitar and vocals as well as composing all the songs. On its debut album, Ragged Atlas (Intakt, 2010), the group was a quartet with Frith playing guitar plus bass; this time around bassist Shahzad Ismaily has joined the group alongside violinist Carla Kihlstedt, accordionist Zeena Parker, drummer Matthias Bossi plus Frith. All five sing. The Letter was studio-recorded in France in June 2010 and Oakland in August 2011. It features twelve Frith compositions. He describes the group as follows: "Cosa Brava is about storytelling... Some of the stories have words and some don't... The musicians of Cosa Brava are fellow nomads and experienced collaborators, and some of the best storytellers around, so my stories become their stories." In fact, only three of the tracks have words, two co-written by Frith and Zaina Nasr, so most of the storytelling is non-verbal.

Although it does not have a coherent narrative, the album hangs together well and is best listened to as a whole suite, a fact emphasised by the fact that it ends with a reprise of the opener, "Soul of the Machine." Frith's compositions are melodic throughout and provide the group with plenty of scope for embellishment. The compositions are not in any particular genre but, while they have elements of folk and rock (prog rock even), they transcend genre. Most noticeably, the music is light years away from the improvisations on MMM. Cosa Brava is a tight group in which all members contribute to its distinctive sound, as do The Norman Conquest who were responsible for the sound manipulation which adds shading to the music. Time and again, Kihlstedt's violin grabs the attention, her inflections carrying great emotional weight. Frith is heard at his best on "Common Sense," where his fluid guitar is interwoven with wordless vocals, to stunning effect.