By JOHN EYLES
August 28, 2018
Sign in to view read count
The Paris-based double-bassist and composer Sebastien has quite a history, being in smaller ensembles such as Wark (alongside alto saxophonist Marc Baron, tenor saxophonist Antoine Daures and percussionist Guillaume Dommartin), R.Mutt (with alto saxophonist Pierre-Antoine Badaroux and percussionist Antonin Gerbal) and Un Poco Loco (with tenor saxophonist/clarinetist Geoffroy Grombone and trombonist Fidel Fourneyron), and also in much larger bands like ONCEIM, Umlaut Big Band—see him in the YouTube clip below—and Ensemble Hodos, which he directs. Two 2018 releases on Umlaut Records—which has previously released albums by all of the above except Wark and ONCEIM—spotlight two facets of the bassist not previously featured on disc... 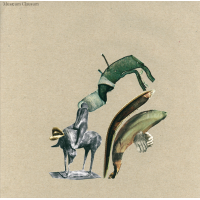 Remarkably, Musæum Clausum is another fine Beliah trio. He is joined by two players he is familiar with, French cornetist Louis Laurain (who is also in Umlaut Big Band and ONCEIM) and German drummer Hannes Lingens (also in Ensemble Hodos). Available on CD or twelve-inch LP, the album was recorded in two days in September 2016, in a former East German ballroom, in Halle.

It consists of three extended tracks totalling fifty-four minutes. The trio's music is freely improvised and flows smoothly without any hesitations or pauses. Understandably, the three players sound familiar with each other and at ease together, giving their music a relaxed and relaxing feel throughout.

Given the instrumentation, it is no surprise that Laurain's cornet is out front for the majority of the time; he soloes without any apparent pause for thought, producing fluid phrases one after another, again and again. However, the trio is most definitely not lead soloist plus rhythm section; Beliah and Lingens do a fine job of supportive time-keeping alongside Laurain but they do far more besides, adding detail and coloration that keeps each track engaging from first note to last. The three deserve equal credit for the disc's success; it is a collective triumph and we must hope to hear more from this threesome soon.

In addition to all his group activities, Beliah is involved in education, teaching double bass, jazz and improvisation at the Conservatoire de Reims. His compositions have been played by a range of musicians, and he performs solo bass pieces by other composers as well as giving solo improvised bass performances. So, it is surprising that Nocturnes is his first album as a solo bassist.

Instead of displaying all the tricks in his box, as other bassists have been known to do on a solo album, Beliah's album consists of two tracks entitled "Nocturne no. 1" and "Nocturne no. 2," totalling just under forty-two minutes. That is a self-effacing gesture as it means that rather than the bassist himself being the focus of the album, the instrument itself is placed in the spotlight, with Beliah demonstrating what it can do.

Both tracks are played arco rather than pizzicato, so the music consists of a series of extended notes that combine together into an ever-shifting drone. Changes of volume, pitch and timbre bring variety to the music so that it remains engaging throughout. In titling these pieces as nocturnes, Beliah is indicating that this is late-night music. However, rather than being sleep-inducing, the music is better suited to those who enjoy a period of quiet reflection or meditation before retiring to bed. Sweet dreams.