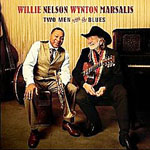 In case you missed it, back in 2006 singer and guitarist Willie Nelson—then 73 years young— got busted in Louisiana. Highway police following Nelson's band bus noticed a strong smell of marijuana coming out of the windows, stopped the vehicle and found somewhere between one and a half and two pounds of weed and a bag of magic mushrooms. A US cable TV host reported they also found a jar of formaldehyde containing Waylon Jennings' foot.

Nelson, who made his name in country music, but who for decades has ploughed a wider furrow which also includes blues and a little jazz, and who, even at his advanced age, still hits the road for months at a time, lives a life not unlike the jazz musicians of yesteryear. He also shares jazz musicians' graveyard sense of humor. The other occupants of the bus—variously aged between 75 and 50 years—were all shaken down along with Nelson, except the 75 year old, who slept through the entire event. When he later asked Nelson why the police had let him carry on sleeping, Nelson replied, "I told them you were dead."

The bust gives a general resonance to Two Men With The Blues and in particular to "Ain't Nobody's Business," the penultimate track on this live recording made at the Lincoln Jazz Center's Allen Room with trumpeter Wynton Marsalis and his band over two nights in January, 2007.

The music—which mostly inhabits an up-tempo blues 'n' boogie jump band style reaching back to the late 1940s—is the sort of stuff you might hear, if you were lucky, in a roadhouse in the southern states anytime over the past 60 years, albeit played here by musicians of international standing—Marsalis' regular small band augmented by Nelson's harmonica player, Mickey Raphael.

It isn't risk taking music. It's meant to make you kick back and get happy—and it does. Nelson's voice is still in pretty good, smoke-cured shape. It shows a little untoward strain on Hoagy Carmichael's interval-leaping "Stardust," but this is made up for by his reading of Carmichael's equally beauticious "Georgia On My Mind." His guitar playing, in which shades of Django Reinhardt mingle with those of T-Bone Walker, is surprisingly substantial. He solos, briefly and delightfully, on seven of the 10 tracks, and ravishingly on two of them, including his own "Rainy Day Blues." Marsalis and saxophonist Walter Blanding also turn in succinct but attractive solos.

The sort of album which gives one-off supergroup projects a good name.