Howard Riley: Two is One

BY JOHN EYLES
November 6, 2006
Sign in to view read count 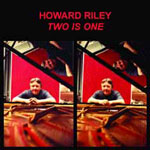 Howard Riley is one of those musicians that we (those of us in the UK, that is) too easily take for granted. If he were flying in from some far-flung corner of the globe to perform, we'd be loudly singing his praises; as it is, we know he's great, but we don't shout about it often enough. This release provides a chance to remedy that a little.

Two is One is a near-flawless gem. It finds Riley duetting with himself for the first time in over a quarter of a century. In the studio, Riley improvised nine shortish pieces—none over eight minutes—and then immediately added a second piano part while reacting to the playback of the first. The resulting music—with the first part on the left channel and the second on the right—does not sound overdubbed; rather, it sounds like two players, totally tuned into each other's thoughts, improvising together spontaneously, without premeditation. The stimulus and response intertwine so well that without that channel separation, it would be almost impossible to determine which is which.

Riley draws on a vast reservoir of piano history here, so it would be possible to cite dozens of players whom the music calls to mind. The only one that Riley name-checks overtly is Monk on "Osoiretsim —not improvised, but based on a Monk piece [clue: reverse the title]. Elsewhere, from the fractured boogie train rhythms of "Doubling to the inside/outside duet of strings with keys on "With Strings, to the restrained melodic beauty of "After the Storm, there is a profusion of rich, varied music here, music to return to repeatedly and often.

Two is One; Closely; Empathy; Second Thoughts; Doubling; Osoiretsim: Hear and Now; With Strings: Unique; After the Storm.