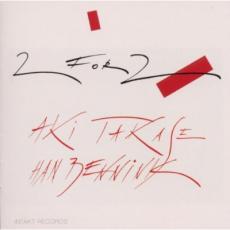 Sparks should surely fly when two of the most creative musicians on the planet come together, shouldn't they? Well in this case, no. Pianist Aki Takase and drummer Han Bennink bring heavy experience to bear when they play, but in this case their efforts are underscored by a combination of tentativeness and heavy-handed humor.

The latter hasn't been so leaden in the past and has been a welcome part of their work but here, as exemplified by the reading of "Do You Know What It Means to Miss New Orleans?," the quality is painted on thick enough to coat all nuances. The result is irritating, like the sound of a couple of musicians for whom the past is nothing but a place rife for ridicule. Such are their legacies that it's obvious they don't take that view, which makes it seem even odder.

Takase has always had a highly personal take on Thelonious Monk's music and this comes to the fore on that composer's "Raise Four," even though the lack of a third player somehow lends the music a perfunctory air, an impression compounded by the way it dies at the close.

The opening passage of "Rolled Up" is also rife with promise and, while this is one of the more successful encounters in the program that promise, it isn't really fulfilled. Instead, the feeling of a couple of musicians going through the motions prevails, especially when Takase falls to quoting from "I'm Beginning to see the Light."

The duo's reading of the title track is, at least, a reminder of why Bennink is considered by some to be the greatest European jazz drummer; but, again, the joy is fleeting, as the music soon falls to a lower level which at least provides continuity with the rest of the program.