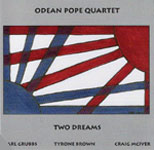 With uncertain times comes the natural urge to seek sources of stability. An Odean Pope album is like a figurative life preserver in this regard. A listener can pretty much bank on certain assurances if Pope's horn is piloting the ship. Mellifluous free bop charts, ample solo space for the participants, and a guiding appreciation for Philly-born soul are norms. But such consistency of intent and application can cut both ways. Quality is assured, but deviations from the formula are infrequent.

This recent CIMP date fits snugly within the established mold. Pope's long-limbed style of soloing finds almost immediate egress after a swiftly stated head on "Turn Me Loose." Shaping from a stern string of phrases his solo spools out over the flexible rhythm of Brown and McIver. The latter two have served loyally as Pope's sidemen for many years. Altoist Grubbs is well acquainted with Pope's preferences too, having invited his friend to participate in an earlier CIMP date, Stepping Around the Giant. His piquant alto packs in plenty of urgency and velocity, often voicing notes in accelerated bursts.

Pope opens "The Foliage" a cappella, sketching a fluttering upper register preface imbued with a delicacy that allows the patter of his pads a place in the acoustics. Grubb's horn joins in and the pair traces a overlapping melodic path, embellished by rolling mallets and centering bass. Pope once again presses forward in a solo that seems to invert the steady ropes of notes pouring from his horn's bell back upon themselves. Grubbs answers with an equally burnished exposition, riding at roughly the same register elevation and making the tonality of the two horns deceptively similar in spots. Their confluence comes to a culmination during the somber spate of harmonizing that closes the piece out.

The program's remaining pieces plumb much the same melodic territory, even recycling heads in several instances, but do so without sounding humdrum or boiler plate. "Quick" is just that, a sprint through a twisting chart shot through with tinges of Ornette that also acts as another feature for McIver's press rolls. The title track takes shape in a lengthy relay between the horns written on the back of a delicate bass soliloquy from Brown, a feat he repeats on "Fifth House" and "AnDar." Grubbs picks up and strolls with a line, only to hand it off to Pope to further elaboration. The leader reciprocates by volleying it back and so unfolds a lovely colloquy between the two men, punctuated by sections of sweet harmony. With "Lines of Four" the players have cap off what has become a strong body of music.

Pope once stated that one of his goals was to play at the bottom range of his instrument like Coltrane played at the top. Here he upends that tactic, favoring the higher registers in proximity to his partner Grubbs. The Trane inflections and cerulean hues that are his principal pigments are still there. They wrap around this fine set like a warm enveloping blanket.