BY JOHN KELMAN
November 4, 2010
Sign in to view read count 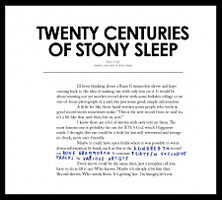 Since releasing its first album, Supersilent's groundbreaking 1—3 (1998), Rune Grammofon has evolved into one of Norway's most consistently intrepid and unfettered labels. With every passing year, it's stylistic purview—largely focusing on Norwegian artists—expands just that extra bit further, with music ranging from the sublime beauty of In The Country's debut, This Was the Pace of My Heartbeat (2005), to the skewed techno-pop of Susanna and The Magical Orchestra's 3 (2009). For over twelve years, label head Rune Kristoffersen has provided a place for contemporary classical music with Ole-Henrik Moe's Ciaccona / 3 Persephone Perceptions (2008), progressive fusion from Elephant9 and DodoVoodoo (2008), the outer reaches of guitar-driven expressionism on Scorch Trio's Brolt (2008), and the psychedelic prog rock of Motorpsycho's Heavy Metal Fruit (2010). And that's just scratching the surface.

It's impossible, then, to capture the full breadth and depth of this small label with big ideas on a single disc (or two-LP set, or limited edition box with both formats, an exclusive 2000 Supersilent performance, also on vinyl, and more), but Twenty Centuries of Stony Sleep strives to do just that. With 75-minutes of previously unreleased music from twelve of its artists, Rune Grammofon's hundredth release also affords a sneak peak at Jenny Hval, whose "Golden Locks"—its compelling poetry supported by dark, sometimes obliquely folk-tinged music—suggests a new recruit well worth checking out when her label debut is released in 2011.

Sequenced so that makes even the most disparate music seem perfectly congruous, Twenty Centuries opens with Alog's ear-shattering, feedback-driven but nevertheless hypnotic "My Card is 7," while The Low Frequency in Stereo's "Aux Club" grooves along; a riff-driven piece of space-rock that contrasts with the lyrical "Barbara," a surprising instrumental that just might be the best thing Bushman's Revenge has ever done.

For those who've yet to experience the absolute unorthodoxy of guitarist Stian Westerhus, "Discipline of Undiscipline" gives seven minutes worth of reasons to do so, while the shorter improv of Puma—his collective with keyboardist Øystein Moen and drummer Gard Nilssen—suggests that absolute freedom needn't preclude absolute beauty. Singer Maja S.K. Ratkje, whose Veljo Tormis remix was a high point of Punkt 2010, eschews any and all predictability with "Breathe," while both In the Country's "Slow Down" and Espen Eriksen Trio's "Ambitions" broach emotional fragility from vastly different angles.

Twenty Centuries concludes with two tracks that, perhaps, best represent what Rune Grammofon is about. Deathprod—aka Helge Sten—is a key figure with the label: musician; producer; engineer; and sound sculptor. "Mysterium Magnum" is a gradually intensifying electronic soundscape that leads perfectly into Supersilent's "C-7.1," an outtake from the group's DVD, 7 (2006), proving that this all-improv group is as capable of in-the-moment melodism and haunting poignancy as it is thundering pulses and ear-shattering sonics.

For the Rune Grammofon fan, Twenty Centuries of Stony Sleep is a love letter that sets the stage for the next hundred releases. For the uninitiated, it's the perfect introduction to a label that has become synonymous with intrepid experimentalism on the vibrant Norwegian scene.

My Card is 7; Aux Club; Salinity and Brine; Ambitions; Slow Down; Barbara; That Day in the Shower; Discipline of Undiscipline; Breathe; Golden Locks; 3 am Moth; Mysterium Magnum; c-7.1.