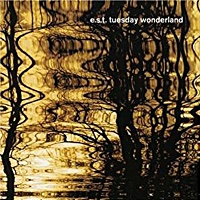 For its first release to be distributed by a major label since Strange Place for Snow (Columbia, 2002), the Esöjorn Svensson Trio (e.s.t.) continues to mine and expand the road traveled on Seven Days of Falling (215 Records, 2004) and Viaticum (215 Records, 2005). Tuesday Wonderland doesn't exactly break new ground for e.s.t., but equally it's a gradual evolution of the pop sensibility-meets-jazz improvisation aesthetic that's been a fundamental since the trio first emerged in 1993.

As the group has evolved, the use of electronics has become more prevalent, a potential double-edged sword. Bassist Dan Berglund's sometimes processed acoustic bass, fed through distortion boxes and wah wah pedals, gives his aggressive arco playing on the title track a sharp, metallic edge that's a clear reference to his fondness for heavy metal bands. Berglund has, in fact, become an equal frontline voice alongside pianist Svensson, who continues to demonstrate a fine balance between lyrical economy and greater virtuosity.

Drummer Magnus Öström may not get any real solo space—this is a piano trio, after all, that largely eschews the conventional theme-solo-theme format—but he powers the band both subtly ("The Goldhearted Miner") and with a more hard-edged, propulsive approach (the dynamic juxtaposition of "Brewery of Beggars").

For a group that's been together for nearly fifteen years and has become one of Europe's most popular jazz acts, this Swedish trio has managed, for the most part, to avoid both becoming stale and devolving into any kind of self-parodying shtick. There are unequivocal markers that define e.s.t.: Berglund's processed bass, Svensson's generally subtle use of electronics (though they've never been more prevalent than on this record), and spare ballads balanced with complex contrapuntal material where Berglund demonstrates greater technical facility. But what keeps the group fresh is the fact that once one pares away the specific musical definers, e.s.t. is still an improvising band capable of generating surprising excitement on the simplest of vamps ("Dolores in a Shoestand").

While it's always been a democratic trio, the fact that its name comes from the pianist might suggest some undue emphasis on Svensson's prodigious talents. For those who have been following the group since When Everyone Has Gone (Dragon, 1993), what's been most satisfying about e.s.t.'s journey is an increasingly equitable balance where it truly is a trio of equals. Svensson may get the lion's share of solo space, but Tuesday Wonderland is a record that would be entirely different were it not for the equally significant contributions of Berglund and Öström. It's best effort since Strange Place for Snow, the wider North American distribution of Tuesday Wonderland should help push e.s.t. towards the greater success it's achieved in Europe.