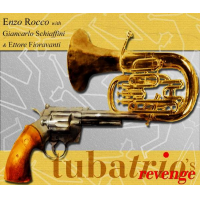 The debate over "What is jazz?" is as subject to changing collective tastes and individual preference as the age-old question "What is art?" We may never reach an answer that satisfies everyone. Hence the nature of the argument.

But even proponents of the most liberal definition of the word will have to concede that labeling something a "jazz" album inevitably brings with it certain connotations. And when Tubatrio's Revenge is placed in the hands of the local record store clerk, he or she is going to have to file it under some larger category for the sake of easy browsing, and that larger category will most likely be jazz. After all, it's got a guitarist, tuba/trombone player and drummer, which for all intents and purposes is a perfectly respectable jazz trio. Furthermore, all of them are relatively well-known jazz performers in their native Italy. So jazz it is.

That would be a mistake. You see, Tubatrio's Revenge is more art-rock or obscure post-rock than jazz. I'm not trying to turn this into an issue of musical semantics; but if this is jazz, then so is This Bright Apocalypse, early Camper van Beethoven, C and Tortoise, to name just a few. Take "Il paese dei nasi" ("The Country of Noses"), for example. It's a surf rock escapade spiced with a wilfully amateurish tuba part that seems to be borrowing notes from the theme from The Simpsons. "Animali pericolosi" ("Dangerous Animal") is a gritty, repetitive, flat-out rock 'n' roll chart, lurching and stuttering for eight consecutive minutes while Schiaffini wails on the trombone. One of the more melodic tracks, "Sonia, Tania, Olga e le altre ragazze del Volga" ("Sonia, Tania, Olga and Other Girls of the Volga"), far from being some kind of Chekhovian ode, is instead a Slavonic dance so burdened with irony that it can barely get off its feet.

This may go beyond generic distinctions to trying to make sense of the esoteric. In parts, "Pulpbone," with all its spacey digital distortion, sounds like injured whales communicating across ocean depths - more akin to a nature program than a music CD. "Itadakimasu" later reprises the same digital effects, though it's anyone's guess why.

Tubatrio's Revenge isn't exactly unlistenable. It's just that I can't envisage a listener for it. Nor is it entirely unclassifiable. Post-rockers, however, will want something with a little more rock and better use of electronics, and jazz fans will want something a little more, well, jazzy, or at least fusion-oriented. Rocco, Schiaffini and Fioravanti have made a unique album that seems to have succeeded in keeping the three of them highly amused. Whether jazz listeners - or anyone else, for that matter - will derive the same enjoyment is, like the definition of jazz itself, open to debate.

Visit Caligola Records on the web. 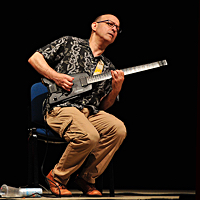