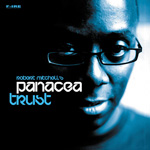 The cultural trajectories of most musicians tend to be unidirectional. Sometimes they point south towards real or supposed roots and authenticities, sometimes north towards the European conservatoire, sometimes east and sometimes west. Rarely does the rocket travel in two directions simultaneously.

Robert Mitchell's vision, unusually, is omni-directional. He is as involved with African and South American musical traditions, especially their rhythmic heritages, as he is with post-Debussian European composition and harmony, and as concerned with the spirit as he is with the intellect. These particular bipolarities make for a distinctive and ambitious vision, and one which sits happily amongst the other movers and mavericks which make up London's rainbow-hued F-IRE Collective.

Mitchell is also equally well-balanced between instrumental and vocal musics—every track on this album, Panacea's second, features vocals of some sort: sung, rapped or recited, occasionally wordless, mostly with lyrics. As the title of Trust suggests, the songs are mainly concerned with relationships, be they stable, as on "A Heart (Full Of You)" and "The Thief Of Dimensions," or in flux, as on "Breath On The Mirror" and "The Brink."

Mitchell's music manifests an arresting tension between the astringent, almost atonal, sung vocal lines, with their allusive language, which are features of most tracks—and the warmth and passion of their instrumental accompaniments. Saxophonist Barak Schmool and percussionist Volker Strater, for instance, are both hot and emotionally articulate players, and their contributions are key to leavening and humanising Mitchell's compositional austerity. Strater is especially strong on "The Thief Of Dimensions" and "Shukran," and Schmool is compelling throughout. Mitchell himself is a fluid and inventive joy on his all too infrequent solos.

Mitchell's singular blend of east and west, north and south is still in development. But this is an album of considerable depth and substance which reveals new facets with every additional listen.

Visit Robert Mitchell on the web.

The Brink; Cotopaxi; Breath On The Mirror; If These Walls Could Speak; The Thief Of Dimensions; Shukran; Trust; A Heart (Full Of You); Ocean (In A Small Hand).