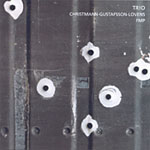 The first meeting (and there have been many more since) of this trio is a cause for a celebration that asks: "What took you so long?" Recorded live in 1994, this stellar document should not have taken sixteen years to surface.

Wrong righted, it celebrates the introduction of Swedish saxophonist Mats Gustafsson (then age 30) with two improvisers twenty years his elder: cellist/trombonist Gunter Christmann and percussionist Paul Lovens. Gustafsson had already collaborated on the first-rate discs Mouth Eating Trees And Related Activities (Okka, 1996), with Lovens and bassist Barry Guy, and the duo disc Nothing To Read (Blue Tower, 1991), alone with Lovens. He later recorded the duo set One to (Two)... (Okka, 1999) with Christmann.

Tr!o's eight shortish pieces, none exceeding nine minutes, contain a surprising lack of grandstanding. Each player is satisfied to maintain a constant stake of simmer, or smoldering effect that crackles with energy and pops with sound but represses the outward burst. The tension created is palpable, and adds to the experience.

Lovens and Christmann, longtime collaborators, are comfortable in these environs, taking and giving each space to create. The addition of Gustafsson does not deter their mission. Christmann, a noted trombonist, sticks mostly to cello here, leading Gustafsson's vocalized saxophone. When he does pick up his horn on the fourth and sixth rendition of "Something More," the two sound off as two birds singing from the same tree. The interplay here is egalitarian and elegant. Each player is content to finish the other's' thought, while Lovens chaperones the journey.