BY DAN BILAWSKY
September 16, 2015
Sign in to view read count 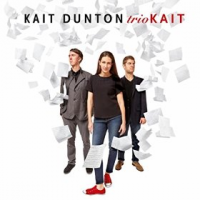 Pianist Kait Dunton's previous album—Mountain Suite (Self Produced, 2012)—was an impressive and nuanced affair that brought drummer Peter Erskine, bassist Darek Oles, saxophonist Bob Mintzer, and trumpeter John Daversa into her orbit. Here, she works with a different set of musicians and focuses largely on different forms of groove-based music: Dunton aligns herself with a pair of her peers—electric bassist Cooper Appelt, who she met during her time at the University of North Texas, and drummer Jake Reed, who she became acquainted with at the University of Southern California—and lets her love for everything from hip hop to Brazilian music and EDM to R&B affect the outcome.

Dunton's trio—the aptly-named trioKAIT—works many a stylistic angle in its music, but the success of these songs can be boiled down to the way bass, piano, and drums lock in together. Calculated piano lines flow atop hip grooves in seven ("Prelude"), mellow and sultry sounds permeate the air ("Ria"), buoyant bass and drum work propel the music as Dunton dances over the keys ("50 Freeways"), and funky, understated tides carry things along. These three musicians are adept at creating chilled out, head bob-inducing pieces ("Yes," "Love Lost"), many of which take on a different mood characteristic. One may come off as a feel-good ditty ("Wil's Theme") and another may present as a slow jam that sounds like a fragment of Ary Barroso's "Brazil" filtered through J Dilla's mind ("Custom"). But despite these differences, a similar methodology is at work on each, as the music rests on chemistry, camaraderie, and the trio's ability to collectively create and capitalize on rhythmic action points.

This trio sees every song and idea to a logical conclusion and nothing overstays its welcome here. Dunton has the good sense to know the difference between a fully-fleshed out composition and an attractive idea, allowing entries in the former category to fully blossom ("Noraa") and letting those in the latter grouping come and go in passing fashion. Her band mates, likewise, know just what to do for this music, be it keeping a steady groove in motion, making a slight adjustment, or taking a song-altering detour. The members of trioKAIT are on the same page throughout this program.