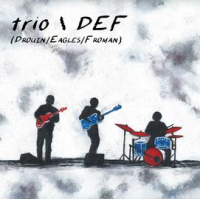 Based in Canada, with members resident in Ottawa, Montreal and New York City, trio \ DEF overcomes logistical hurdles to create some mighty fine guitar trio jazz and jazz-rock on their eponymous debut. Bassist Marc-Andre Drouin, a completely unfamiliar name to me, plays the plugged-in variant with the elasticity and warmth of an acoustic bassist. He is quite a find. Drouin's playing during a masterclass at Carleton University's School for Studies in Art and Culture, where guitarist Wayne Eagles teaches and directs the institution's Fusion ensemble, catalyzed the formation of Trio DEF in 2012. When original drummer Lee Fish had to be replaced—apparently by another drummer whose surname started with the letter "F"—Eagles put in a call to Ian Froman, a top-drawer player on the New York scene who's toured and recorded with Tommy Smith, Metalwood, and Laszlo Gardony. Eagles had worked previously with Froman in the group Regals, and their simpatico was quite well-established on that band's debut recording The Double Duo Sessions (Tetra Artist, 2011).

From the git-go, it is readily evident that Trio DEF has put in some heavy listening time with the ECM Records catalog. They specialize in the sort of loose-but-tight ensemble playing that's the stock in trade of similarly instrumented trios led by Terje Rypdal (e.g., To Be Continued, ECM Records, 1981), and John Abercrombie (Gateway, ECM Records, 1976). Froman's drumming style is highly influenced by Jack DeJohnette's, which makes the ECM parallels that much stronger. Themes and melodies are brief, yet substantial; appearing and dissipating at will at any given moment within a particular track. All Trio DEF-ers get time in the musical foreground, yet there are passages of trio and duo improvising, as well, with the third person taking a back seat.

Not content to play in one bag, the trio has a harder-edged, bluesy side that comes to the fore on "BC-ing-ya," "Or Not!" and "At Most, Spheric." Here, Trio DEF seems to be mining a musical vein tangentially related to Steve Khan's wonderful trio and quartet recordings from the mid-80s and 90s (some of which also featured Jack DeJohnette). Like Khan and Wayne Krantz, Eagles is an understated player whose solos emphasize harmonic development and the use of space as an improvisational device. Eagles' economic playing seems to have a beneficial effect on both Drouin and Froman, who appear to be perpetually holding their monster chops in check. Thus, each piece is bathed in a sort of mutually-agreed-upon tension that makes the album, as a whole, quite a worthwhile way to spend 45 minutes or so.