By Laurel Gross
February 8, 2008
Sign in to view read count 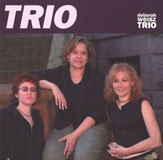 When some people talk about jazz being good because it is "relaxing," this listener wants to scream: What's wrong with these people? Jazz should be all kinds of things, but "relaxing ? That word seems to imply that the music is not challenging, interesting.

Well, here's one case where this writer might have to eat her words. Trio is a highly engaging and likeable foray into mostly straight-ahead territory; yes, served straight up but with a twist. Some people might, in fact, want to "relax while listening to it. They may find it impossible not to—this is a laid-back and easy-going endeavor, at least for the listener (the musicians involved still had to do what they have to do to produce this excellent sound). But it is also, to give full credit where it is due, interesting and reflective music, with composing and performance elements that put the trombone through its paces.

And this trio—led by trombonist and composer Deborah Weisz—is accomplished. Guitarist Sheryl Bailey and bassist Nicki Parrott (who has had a long run accompanying legendary guitar master Les Paul on his Monday night outings at New York's Iridium club) lend absolute support to Weisz' playing and music. Her three-part piece, called "TRIO," charmingly introduces itself first as "Once," then on track five as "Twice and later as "3rd Time's the Charm." And it works every time.

Also on hand are recognizable tunes such as Monk's "Pannonica and "Bemsha Swing, and Weisz arrangements of Tadd Dameron/Carl Sigman's "If You Could See Me Now," Jerome Kern/Oscar Hammerstein's "Nobody Else But Me (with inspiration from a Tom Harrell solo on this song) and Antonio Carlos Jobim's "Zingaro." Bailey gets a nod with her own ballad "When My Love Has Gone."

Should one complain about the good friend who always make you feel good? Certainly not. Put up your feet and chill.

TRIO--Once; If You Could See Me Now; Pannonica; Moon Song; TRIO--Twice; Nobody Else But Me; When My Love Has Gone; Love Dance; TRIO--3rd Time