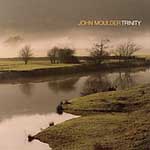 one can overstate the importance of parallel careers, it's hard to avoid touching on the subject with John Moulder. The ordained priest has also managed an active musical career in Chicago as a guitarist—most notably as a member of ex-Pat Metheny Group drummer Paul Wertico's trio for the past twelve years. It's easy to forget his spiritual leanings on albums like Spirit Talk (Naim, 2003), a standards-based duo record with vibraphonist Ken Hall. But when you call an album Trinity, you're making a statement.

Moulder's record is a fully intended and stylistically sweeping sacred song cycle that, as he writes in his liner notes, "is my musical interpretation of our journey in God from the primordial to the eternal." Ranging from solo pieces to a horn-driven octet, from free improv to pastoral gentility to the Mississippi Delta, it doesn't always succeed in evoking a spiritual journey. As a musical narrative, however, it demonstrates Moulder's multifaceted talents as an improvising guitarist, composer and arranger better than anything he's released to date.

Other tracks are less inherently visual, but no less compelling. It may be hard to find a clear link between the alternating 6/4 and 5/4 bars of "Exodus" and its title, but with Ken Hall's vibraphone playing and Moulder's quirky melody, the blues feeling harkens back to late-1960s Gary Burton. But rather than the clean tone employed by Larry Coryell, Burton's guitarist of the time, Moulder's heavily distorted tone suggests what might have been had Burton collaborated with Mahavishnu-era John McLaughlin.

Paul McCandless appears on three tracks. The gently pastoral quintet piece "Incarnation" and folkloric duet "Pieta" are very Oregon-esque, featuring the Oregon co-founder on English horn. "Sorrowful Mysteries" is considerably darker. Moulder's overdriven guitar and McCandless' bass clarinet wind around each other melodically before moving into a solo section where Moulder delivers one of the disc's high points—a whammy bar-driven piece of angst that owes more than a passing nod to Norwegian guitarist Terje Rypdal.

What's surprising is that the stylistic variety on Trinity doesn't lose overall focus until the very end. As catchy as the dobro-driven "Freedom" may be, it feels like a non sequitur after the more dramatic, compositionally detailed and somehow final "Resurrection." Still, whether or not it fully succeeds in directly linking music with concept, Trinity certainly makes a strong point for spiritually inspired art.