By Glenn Astarita
December 13, 2014
Sign in to view read count 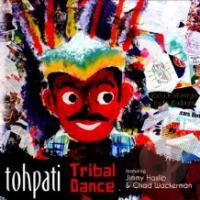 Tohpati's super clean licks and spicy Indo-Fusion treatments offset his crunchy chord voicings and melodic hooks, occasionally treated with spacey distortion lines and electronics-based textural milieus. And his flavorsome compositions yield auxiliary rewards. While the artists' superior chops are in full force, these works are also driven by a multitude of harmonious hooks and Indonesian folk movements to complement the assertive three-way exchanges.

"Spirit of Java" features the guitarist's animated and echo- laden sustain licks, followed by doomsday riffing and Wackerman's polyrhythmic flurries. Yet the album is engineered with a divergent track mix, witnessed by the sonorous ballad "Savana" and a few other wistful movements sprinkled throughout the album. Although they reset matters back into 10th gear during the turbulently in-your-face mid-tempo rocker, "Run." Moreover, the leader fuses funky motifs and Wes Montgomery-like chord phrasings with punishing chord clusters and sleek single note leads, pumped up by Haslip's fluent solo.

Tohpati enters progressive metal environs on "Supernatural," as the trio's voluminous attack contains snaking storylines, reinforced by Wackerman who drills his double bass drum pedals into submission, amid a barrage of cross-sticking maneuvers across the toms. Tribal Dance is not an album where hotshot soloists simply jockey for position. On the contrary, it's a persuasive and sharply focused program that holds its weight after several listens. Indeed, Tohpati is a master craftsman who is spiraling his way towards the A-list of contemporary guitar superheroes.