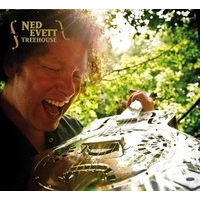 As a vocalist, Evett possesses an imposing tenor delivery. His personalization of life's experiences through the looking glass of art rings loud and clear throughout. A solid effort, there is no filler material in this program, which is filled with some killer riffs and resonates a "Nashville" sound. The acoustic-electric framework works effectively, whether the band incorporates a delicate swagger or spawns pulsating rock grooves.

Each piece stands on its own, with Evett spicing it up with artful slide guitar lines and slick picking breakouts. Diversity is also a major component, partly evidenced on "Sayonara Serenade," which adds vintage British pop to the mix via emphatic and melodious vocal choruses. Enticing ballads, ballsy hard-rock vamps, and surging boogie workouts are executed with impact and sentiment. Moreover, the title track boasts a tuneful, in-the-pocket, straightforward ballad stylization, treated with Evett's daintily engineered acoustic guitar phrasings and atmospheric bottleneck passages.

Designed upon compositions that sustain interest on repeated spins, the guitarist bridges the gap between technical mastery and widespread accessibility. It would be unfair for Treehouse to go unnoticed by the general populace, even though Evett has concocted a sterling reputation among his peers and legions of guitar enthusiasts.

Pure Evil; Falling In Line; Break My Fall; Nightmare and a Dream Come True; Sayonara Serenade; Just About Over This Time; Mars River Delta 2128; Bend Me; Treehouse; Say Goodbye for Both of Us; Why Can't I Believe; Getting Over Someone Too; Dead on a Saturday Night; Don't Despair.