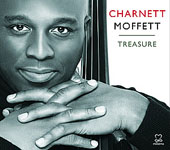 Treasure is the eleventh solo release for veteran bassist Charnett Moffett. Much like his previous efforts, the focus here is on the New York native's jaw-dropping technique on both upright and electric fretless bass. Mixed in with the traditional jazz instrumentation of bass, piano, guitar and drums, Moffett utilizes the more unconventional sounds of tablas, tamboura and sitar to enhance this all-original set of eclectic, swinging music.

Although Moffett's performance throughout the disc will undoubtedly make bass players do a double-take, the music reveals much more than mere bass indulgence. Even on the solo bass tracks ("Country Blues," "Sound Healing I," "Sound Healing II"), Moffett's composing emphasizes groove and melody. The opening "Swing Street" maintains an accessible appeal with a funky momentum, in spite of blazing, effects-driven bass licks. The monster-chops showcase "Beam Me Up" reveals a fondness for the late Jaco Pastorius, with Moffett in commanding form on fretless bass. Adding to the tune's intensity is bass clarinetist Oran Etkin and drummer Denardo Coleman, a long-time Moffett musical collaborator.

Another frequent associate of Moffett, guitarist Stanley Jordan, makes a guest appearance on two tracks, "The Celebration" and "The Things of Swing," the latter featuring some of the session's most inspired playing. Another bright moment comes with "Say La La," a lengthy, drone-based groove, where Moffett shares melodic duty with Kugo harpist Tomoko Sugawara, aided by sitarist Anjana Roy and Angela Moffett on tambura.

Treasure is a welcome addition to Moffett's recorded output. Once again, he continues to find fresh, innovative ways to bring the bass front-and-center.