BY BRUCE LINDSAY
November 13, 2012
Sign in to view read count 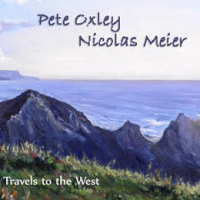 Guitar duos may not be quite as rare as hen's teeth in the world of jazz, but they're far from common. Yes, there are classic pairings such as Bucky Pizzarelli and George Barnes, or John Abercrombie and Ralph Towner; but given the instrument's ubiquity it's perhaps surprising that there aren't more such partnerships around. On Travels To The West, a live album recorded during a short UK tour in late 2011, Pete Oxley and Nicolas Meier demonstrate the qualities that make the guitar duo such a rewarding combination, while their use of numerous different guitars ensures a constant variation in the music's mood and tone.

Oxley and Meier are both experienced and gifted players who combine fluidity and power. Eminently listenable separately, together they form a rhythmically swinging and melodically inventive duo. Oxley's projects include Curious Paradise, with saxophonist Mark Lockheart, and a guitar duo with Luis Dagostino. Meier, Swiss-born and now resident in the UK, performs with his own jazz groups and in the heavy metal band Seven. They also play together in Eclectica!, a quartet with a lineup of two guitars, violin and cello whose "Flight Of Fancy" and "Yemin"—from Flight Of Fancy (MGP Records, 2011)—both appear on this album. On Travels To The West, their undoubted technical skill and obvious joy in playing are readily apparent and the warm reception given to them by the audiences is well-deserved.

Oxley and Meier perform covers such as pianist Chick Corea's "Spain," as well as a number of originals. Meier's lovely "Breeze" features the unusual pairing of Oxley's 12-string electric guitar and Meier's 11-string glissentar. The tonal qualities of each instrument combine to give the album's most distinctive sound. "Yemin," another Meier composition, couples Oxley's steel string guitar with Meier's baglama to create another unusual tonal combination that emphasizes the tune's grace and air of mystery. The duo's version of guitarist Pat Metheny's "Travels" veers towards smooth jazz territory, but Oxley's "Lodder Leaps In" soon ups the pace and energy again, and a brisk nylon string guitar duet on Corea's "Armando's Rumba" is a crowd- pleasing closer.

The sound on Travels To The West is superb: bright, open and with the audiences' responses adding to the live atmosphere. Oxley and Meier are to be congratulated on this in their roles as co-producers, as well as on their masterful and intimate playing.