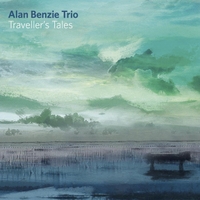 As the title of his debut album suggests, pianist Alan Benzie has travelled. Traveller's Tales is a collection of original tunes inspired by these travels, whether the journeys took place on planet Earth or, as Benzie puts it, "in my head." Real or imagined, these traveller's tales are definitely worth hearing.

The pianist was the first winner of the Young Scottish Musician Of The Year, in 2007, after which he studied in Berklee and became the first British musician to win a Billboard Award. He takes inspiration from his homeland, from jazz and from visits to Japan, where he goes often. These inspirations are rarely obvious, rather they are drawn together to produce something fresh. "Leaf Skeletons," a gentle solo piano tune, sounds as if it was inspired by a frosty winter morning in the Scottish highlands but it might well be Benzie's trips to Japan that led to its creation.

Benzie's joined here by friends and long-term bandmates, bassist Andrew Robb and drummer Marton Juhasz. Such a long-term musical relationship seems to have resulted in a laid-back and unhurried approach to playing—there's a feeling of effortlessness throughout the tracks (which no doubt belies the many hours of hard work all three have put in to reach the point where it all seems easy). Robb's solo on "Glass" is flowing and light, an almost featherlight touch on the strings: Juhasz' often complex drum patterns display a similar deftness.

"Midnight Cafe" evokes a calm, welcoming, late-night space—far from Edward Hopper's Nighthawks territory. "From A to B" is the trio at its most romantic, Benzie's delicate flourishes matched by Juhasz' brushes. Benzie describes "A Wandering Mist" and "Frog Town On The Hill" as emerging from "the traveller in my head." There's a joy to the bouncing rhythms of "Frog Town On The Hill," a contrasting melancholy for most of "A Wandering Mist" before the tune reaches a more upbeat conclusion.