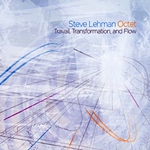 On Travail, Transformation, and Flow saxophonist Steve Lehman continues down the creative path blazed on his previous release, On Meaning (Pi Recordings, 2007). In addition to updating the earlier session's rhythmic energy with even more audaciously contemporary beats, he presents the first jazz-oriented exploration of the musical concept known as spectral harmony.

In spectral harmony, prominent overtones are organized, with the help of computer analysis, according to frequency relationships rather than intervals, yielding striking new harmonies. Lehman advances the spectral music concepts initially developed by French classical composer Tristan Murail (who Lehman studied with at Columbia University in 2006) by adapting them for use in improvisation.

A graduate of the M-Base school, Lehman's intricate writing is both rhythmically striking and harmonically advanced. Gress and Sorey make a tight rhythm section, with Davila's tuba adding an additional layer of counterpoint to shifting tempos and fragmented meters. Lehman's prickly structures allow Sorey to express his considerable skills behind the trap set, an aspect missing from his own highly regarded debut as a composer, That/Not (Firehouse 12, 2007). He unleashes thrilling break-beats on the careening miniature "Dub," the recoiling "As Things Change (I Remain The Same)," and the abstruse "No Neighborhood Rough Enough," fueling Shim's exuberantly circuitous tenor on the later.

A criminally under-rated saxophonist, Shim dovetails seamlessly with Lehman on the intro to "Rudreshm," providing rigorous counterpoint with knotty tendrils of melody. Gradually, each member of the octet enters, weaving a kaleidoscopic mosaic of interlocking harmonies and cantilevered themes until the piece climaxes in a brisk, regal march reminiscent of Henry Threadgill's Very Very Circus.

The album concludes with a riotous instrumental cover of the Wu-Tang Clan's "Living In The World Today (GZA Transcription)," providing the missing link between experimental hip-hop and jazz. Visceral and innovative, Travail, Transformation, and Flow is a brave journey into the future of jazz.