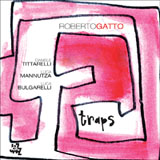 Best-known to North American audiences for his work with fellow Italian, trumpeter Enrico Rava on Easy Living (ECM, 2004) and The Words and the Days (ECM, 2007), drummer Roberto Gatto is, nevertheless, a busy artist in his home country, appearing on dozens of albums over the past two decades. He's also a drummer who, like artists including Jack DeJohnette and Peter Erskine, is evolving a discography as a leader that's oftentimes distanced from its rhythm-heavy expectations.

That's not to suggest Traps lacks a pulse. The jocular title track revolves around a quirky, Thelonious Monk-like conceit that serves largely as a context for some lighthearted interplay between Gatto and pianist Luca Mannutza before bassist Luca Bulgarelli and saxophonist Daniele Tittarelli join in for some of the fun. The equally idiosyncratic and aptly titled "Monkish swings along with some propulsive brushwork. "Octagonal is more contemporary, Gatto's staggered yet funky foundation driving Tittarelli's angular solo before settling into a smoother, less jagged pulse for Mannutza's equally modernistic navigation of the ascending harmonies at the core of the tune.

But Gatto is as much a textural drummer as he is a rhythmic one. There's a subtle pulse to the balladic "The Hands, but his approach is spare and Motian-esque. "Whispering is equally introspective but slightly more insistent, while the gentle beauty of the rubato "North is a lyrical feature for both Mannutza and Tittarelli.

"A Night in Salzau combines a subtle tango with impressionistic classicism and a hint of blues, while Kurt Weill's "Was Zahlen Sie —the only non-Gatto tune on the disc—begins with a dynamically expanding rubato intro that recalls some of saxophonist Charles Lloyd's best mid-1990s ECM recordings. It turns into an elegantly melancholic solo vehicle for Tittarelli, where Bulgarelli's firm yet supple support is at its most nuanced; interactive at an almost subconscious level.

Traps occupies two spaces. The first, akin to Peter Erskine's 1990s trio with pianist John Taylor and bassist Palle Danielsson, is all about understatement. The second is more extroverted, though no less diverse. The album's closer, "Catch the Drums, swings furiously and, despite the presence of piano, is clearly inspired by early-1960s Ornette Coleman. It's Gatto's ability—as much a compositional threat as he is a percussive one—to find the nexus of these two seemingly opposing approaches that makes Traps such a thoroughly satisfying experience.