Ideal Bread: Transmit: Vol. 2 of The Music of Steve Lacy 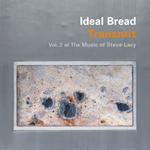 Baritone saxophonist Josh Sinton graduated from pupil to sideman following his studies with Steve Lacy at the New England Conservatory, performing with the late soprano saxophone legend and serving as his copyist. After Lacy's passing in 2004, Sinton founded Ideal Bread as a repertory group in his honor, dedicated to performing his former teacher's rarely covered compositions. Transmit is the sophomore follow up to Ideal Bread's self-titled debut, a limited edition CD-R released in 2008 on the KBM label. Drawing a conceptual thru-line, Sinton's commitment to this project echoes Lacy's admiration of Thelonious Monk's writing.

In addition to Sinton, Ideal Bread includes fellow Brooklyn residents Kirk Knuffke on trumpet, Reuben Radding on bass and Tomas Fujiwara on drums. Their unique instrumentation (for a Lacy repertoire band that is) eschews both the master's singular horn and a chordal instrument, proving the adaptability of Lacy's writing in other contexts.

Most of these tunes are faithful to the master's original vision, with Sinton relying on the basic melodic and harmonic foundations of Lacy's quirky sing-song themes as the basis for his creative arrangements—offering a few twists along the way. The languid bluesy tempos of "As Usual" and "Papa's Midnite Bounce" remain true to the originals, while the usually brisk "The Breath" is transformed into a spectral rubato tone poem. The angular polyphony and loping swing of "Flakes" is recast as a deconstructed march, and though the African-influenced "Cliches" is well documented as a sprightly soprano/mbira duet, Sinton reworks it as a vivacious Afro-Cuban vamp—the album's epic centerpiece.

With his muscular tone and dexterous phrasing, Sinton proves to be as dynamic an interpreter as he is arranger. His flair for crafting architecturally sound solos is impressively demonstrated on "Flakes," where he gradually ascends from supple, blues-inflected note bends to a coruscating screed of chromatic flurries without missing a beat. A rising presence in the Downtown scene and a perfect foil for Sinton, Knuffke seamlessly moves from dulcet introspection and soaring lyricism to probing thematic variations and tortuous abstraction.

Serving as the group's steadfast anchor, Radding's subterranean bass tone resonates through hypnotic ostinatos and churning vamps with impeccable timing. Fujiwara underscores Radding's selfless contributions with a mix of impetuous fervor and understated restraint, his thunderous tom-tom flourishes and pneumatic snare rolls offset by nuanced cymbal accents. Together they drive these tunes with an unrivaled intensity, balanced by an erudite sensitivity—exemplified by Radding's pliant bass solo introduction to "Cliches" and Fujiwara's subtle brush work on "The Breath."

Though widely admired and respected, Lacy's singular artistry has had little obvious influence on the jazz tradition. By reconfiguring Lacy's work without abandoning the rigorous structures that defined his aesthetic, Ideal Bread pays respect to a master while providing greater exposure to an oeuvre that has plenty of avenues to explore.