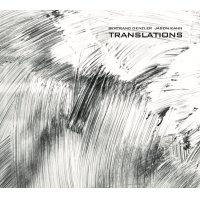 It is a great pleasure to welcome this Potlatch album which was released at the tail end of 2022. From 1998 until 2017 the independent French label released a steady stream of albums, averaging between two and three a year. Then, nothing was released in 2018, one album in 2019, nothing in 2020, two in 2021 and, now, one in 2022. Yes, four releases in five years. Given the dates, the slump was clearly not covid-related... Nonetheless, the good news is that Potlatch is still alive and kicking. Even better, this album features the Geneva-born, Paris resident Bertrand Denzler; the tenor saxophonist has been a stalwart of Potlatch, here making his seventh appearance on the label, having featured on three of those last four releases. He is joined in a duo by the New York-born, Zurich resident Jason Kahn who is heard on electronics and is making his first Potlatch appearance. The two were recorded, in concert, at the Tiasci school of Indian music, in Paris, on December 10th, 2021. The recording, mixing and mastering were done by Kahn. The album comprises one continuous track of just under thirty-five minutes. It begins with the unmistakable snap, crackle and pop sounds of electronics, soon joined by ambiguous noises which may originate from the saxophone. Gradually, these become more recognizable as the identifiable sounds of a blown reed ring out. While the saxophone and electronics never exactly blend together or complement one another, neither do they clash nor get in each other's way. Overall, the electronic sounds occupy rather more of the soundscape than the saxophone, maybe because Kahn had control of the mixing. As a duo, the album is sure to please devotees of either player and to interest casual listeners also. Maybe most importantly, the end product is adventurous enough to be totally at home in the Potlatch catalog. Devotees of the label can welcome it with open arms.