By GLENN ASTARITA
August 27, 2018
Sign in to view read count 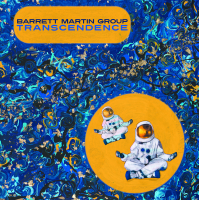 Former Grammy Award winner Barrett Martin is a musical renaissance man. He's a busy session artist for film, TV, and has supported name acts amid his membership in several rock bands. However, Martin's compositional skills shine on this revved-up outing that is reminiscent of the burgeoning jazz fusion scene of the 1970s, when musicians integrated rock, funk and soul into the jazz vernacular. But Martin also imparts a modern sheen into these largely groove-laden works, packed with endearing hooks and sprightly rhythmic content.

On "Rise and Rise" the ensemble initiates a late 1960s type pop motif above Evan Flory-Barnes' corpulent bass notes and the soloists' catchy themes, followed by the saxophonist's jazzy runs to consummate a piece framed with a singalong-like hook. And the retro nod continues on "The Grover," featuring Buck on guitar. It's a piece that could have been composed for pop soul icon, singer Isaac Hayes, resonating with soul jazz background vocal harmonies and a crispy upbeat mid-tempo line of attack.

Don't let the party atmosphere detract from the serious musicianship taking place here. Martin and his band have produced a winner that transparently aligns serious chops, congenial charts and songs that are built to last.